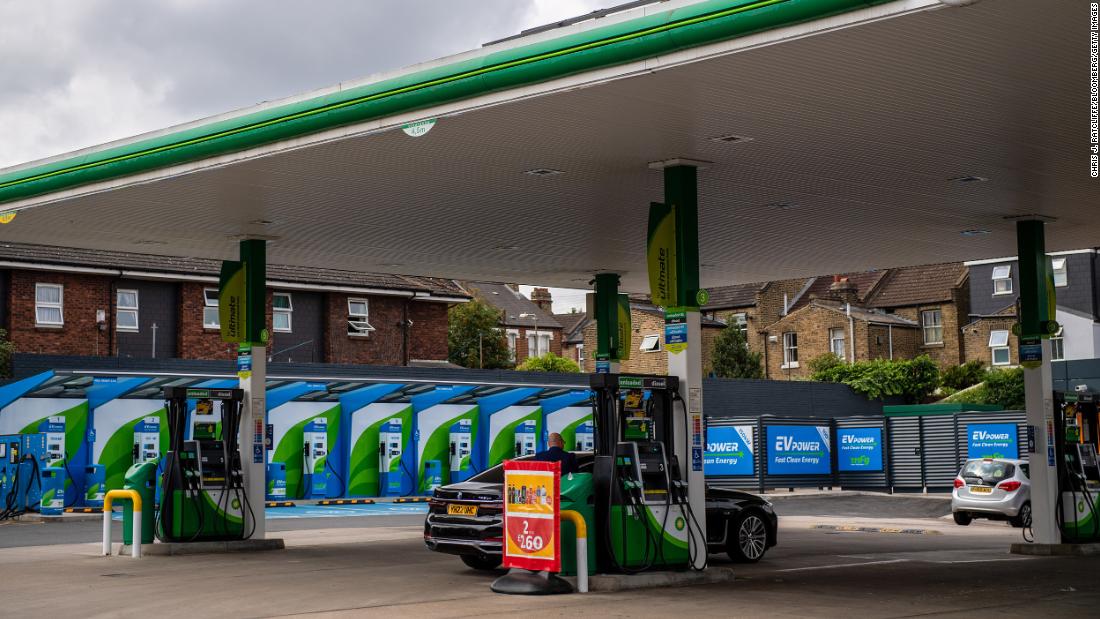 BP (BP) posted $8.5 billion in profit for in the second quarter — more than three times what it made during the same period last year. The company also said it would increase its dividends to shareholders by 10%. Shares nudged up in London Stock Exchange trading.
Across the board, Its been bumper profits for energy giants: Companies including Shell (SHLX) and Exxon (XOM) posted strong results in recent weeks as global oil prices have soared.
But those profits are coming under intense scrutiny from lawmakers, and harsh criticism from consumers.
The combined impact of rising energy bills and food prices has plunged millions of Britons into the worst cost-of-living crisis in decades. In March, the country’s Office for Budget Responsibility said that living standards, measured by levels of household disposable income, had suffered their biggest drop since records began in 1956.
Now, people in the United Kingdom, struggling with inflation at a 40-year high, will likely see their energy bills increase this winter, according to new research.
The average energy bill is expected to rise 83% from its current level to top £3,600 ($4,397) a year beginning January for millions of UK households, according to estimates from research firm Cornwall Insight published Tuesday.
That’s up 7% from its previous estimate made in early July.
As a result, the firm expects the average household will spend more than £300 a month ($366) to power their homes. And the pain will continue well into next year and beyond.
“It is not only the level — but the duration — of the rises that makes these new forecasts so devastating,” Craig Lowrey, a principal consultant at Cornwall Insight, said in a press release.
“This level of household energy bills currently shows little sign of abating into 2024,” he added.
Household energy bills have already risen by 54% this year as wholesale natural gas prices — exacerbated by Russia’s invasion of Ukraine in late February — have soared to record levels.
Ofgem, the UK’s energy regulator, is next due to raise its price cap — the maximum suppliers can charge customers per unit of energy — in October. Many households, already struggling with historically high inflation, are bracing for a huge hit to their finances.
Activists have been sounding the alarm for months. By January, more than half of UK households — about 15 million — are predicted to fall into “fuel poverty,” spending more than 10% of their overall income on energy, according to estimates by the Child Poverty Action Group.

Mega profits have fueled calls for the government to hike a windfall tax on energy companies to ease households’ bills.
“The market is failing and millions will struggle to keep warm this winter,” the End Fuel Poverty Coalition said in a tweet Tuesday.
The campaign group said the UK government, and the two candidates vying to replace Boris Johnson as the next prime minister, were “sleepwalking into [a] nightmare.”
Earlier this year, the UK government said it would introduce a 25% tax on the profits of energy producers, which is expected to collect around £5 billion ($6 billion). The tax will help pay for a package of support worth around £15 billion ($18 billion), including a £400 ($488) grant to 29 million households from October.
But the grant will only “scratch the surface of [the] problem,” according to Lowrey.
“Our new figures show that even increasing support for October will not make much of a dent in what is likely to be a sustained period of high energy bills,” he said.
— CNN Business’ Julia Horowitz contributed reporting.