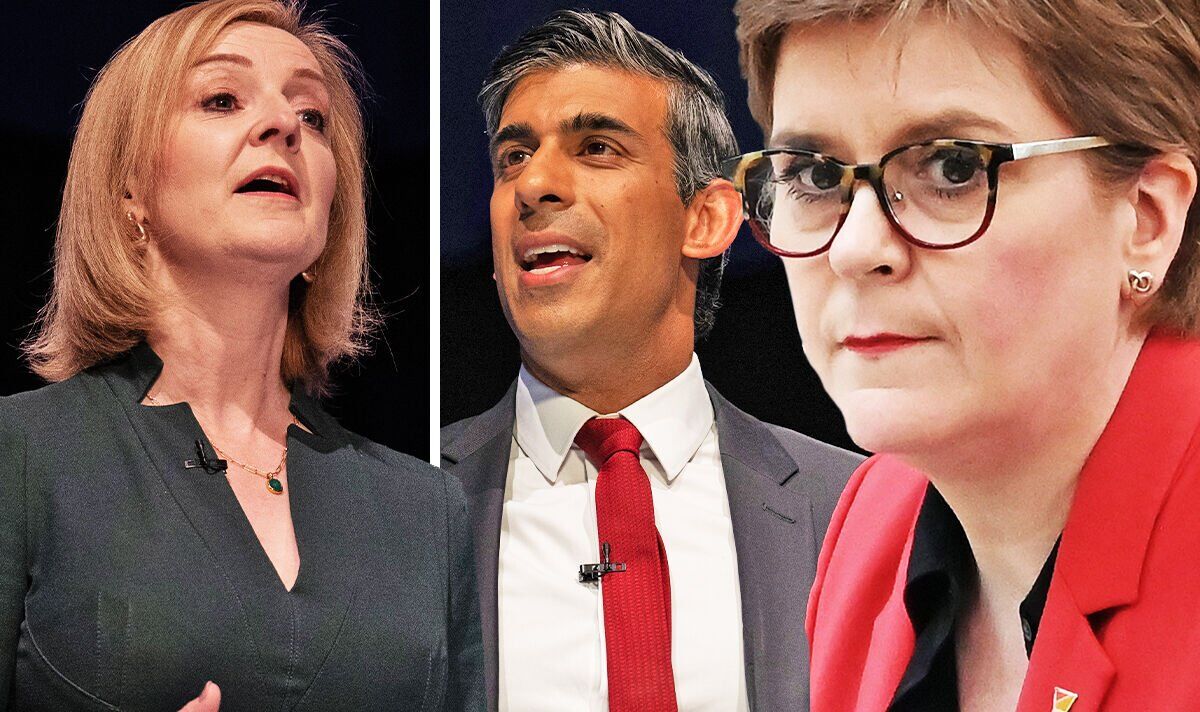 The former Chancellor and Foreign Secretary are the last two candidates in the race to replace Boris Johnson as Prime Minister. The final ballot, in which all Conservative Party members will be eligible to vote, will take place from July 22 to September 2, with the results expected to be announced on September 5.

In Tory Leadership hustings on Friday, Mr Sunak ruled out granting a fresh referendum over Scottish independence, instead claiming he would “lead the most active UK government in Scotland for decades”.

Attacking Ms Sturgeon’s calls for a second referendum, and a jab at Ms Truss, the Richmond MP said: “Nicola Sturgeon and the SNP pose an existential threat to our cherished Union. Arguing that we should ignore them is dangerously complacent.

“We can’t just bury our heads in the sand and pretend they aren’t there – we need to stop them in their tracks.

“And that’s exactly what I would do as Prime Minister – holding the SNP to account for its failings and personally ensuring that the UK Government has a laser focus on delivering for every part of our United Kingdom.”

Mr Sunak’s campaign team said he ensured £41 billion per year for Scotland as Chancellor, and protected around a million Scottish jobs during the Covid pandemic.

It comes after Ms Truss said on Monday that she would “ignore” the Scottish First Minister, and called her an “attention seeker”.

Ms Truss told host Seb Payne: “I feel like I’m a child of the union, I really believe we’re a family and we’re better together and I think the best thing to do with Nicola Sturgeon is ignore her.

“She’s an attention seeker, that’s what she is.

“What we need to do is show the people of Scotland, Northern Ireland and Wales what we’re delivering for them and making sure that all of our Government policies apply right across the United Kingdom.”

Former Tory MP Gavin Barwell, who served as Theresa May’s chief of staff during her time in No 10, lambasted the foreign secretary’s comments

He posted on Twitter: “You can’t ignore the fact that about half of those who voted in last year’s Scottish Parliament elections supported parties who back independence. Unionists need a plan to change some of their minds, rather than sticking our fingers in our ears and saying ‘We can’t hear you'”.

Deputy First Minister John Swinney also said Ms Truss’ attack on Ms Sturgeon from someone hoping to be the next occupant of No 10 is “completely and utterly unacceptable”.

He said: “People in Scotland, whatever their politics, will be absolutely horrified by the obnoxious remarks that Liz Truss has made.”

Mr Swinney told BBC’s Good Morning Scotland: “Nicola Sturgeon has far more democratic legitimacy than Liz Truss is going to have if she becomes the prime minister, and I think Liz Truss has absolutely no right or foundation to make these remarks.”

Kirsten Oswald, the SNP deputy leader at Westminster, also fumed: “The likely next Prime Minister has made crystal clear the partnership of equals Scotland was promised in 2014 was a sham.

“Firing cheap shots to grab headlines is straight out of the Trump playbook but reveals as never before the contempt Westminster has for the democratic choices people in Scotland make and the elected Scottish Government.

“We’ve already seen with Brexit that the Tories and Labour want to ignore Scotland’s government and the wishes of the Scottish people and exert even more control from Westminster.

“But Truss’s cack-handed comments are also a massive blunder on her part because they expose the ugly reality of Tory attitudes to Scotland and will only strengthen support for independence.”

It also comes as polls show Mr Sunak is trailing behind Ms Truss in the campaign.

A YouGov/Times poll of party members suggested Ms Truss had opened up a 34-point lead over Mr Sunak, with the former Chancellor on 26 percent and the foreign secretary on 60 percent.

A ConservativeHome survey of members published on Wednesday suggested Ms Truss was 32 points ahead.

It also saw Mr Sunak on 26 percent, while Ms Truss was on 58 percent.