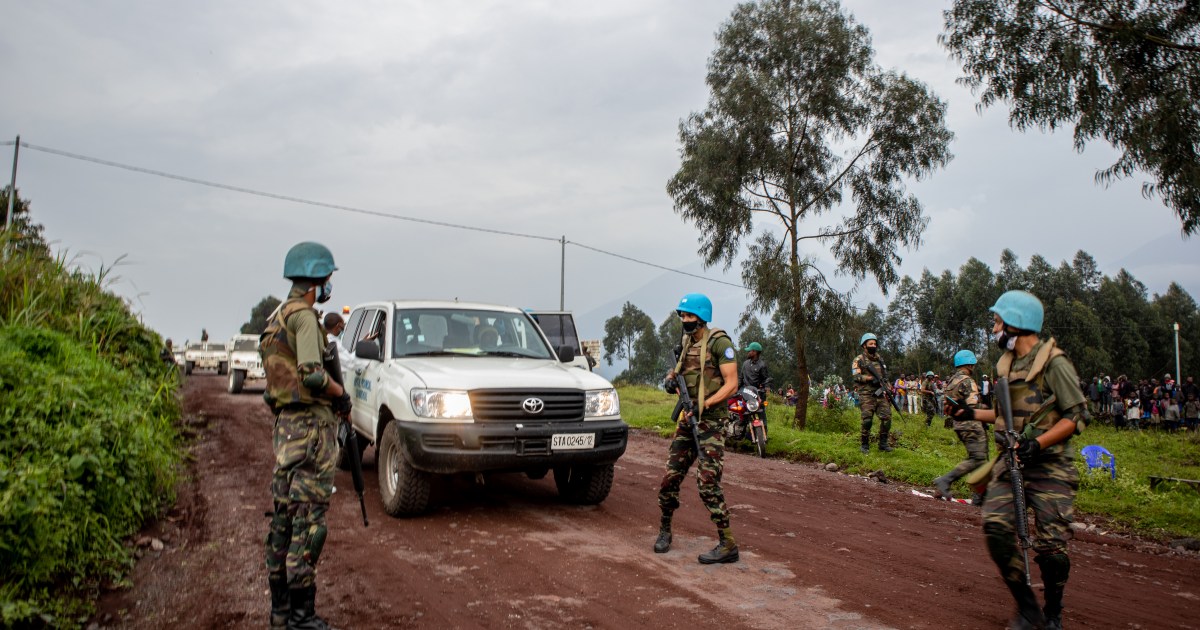 The number of deaths and injuries remains unknown as peacekeepers open fire at a border post in eastern Beni territory, the UN says.

An unknown number of people have been killed and several others were injured after United Nations peacekeepers opened fire at a border post in the eastern Democratic Republic of the Congo (DRC), the UN said.

Video of the incident, shared on social media, showed men – at least one in police uniform and another in army uniform – advancing towards the immobilised UN convoy behind a closed barrier in Kasindi. The town is in eastern DRC’s Beni territory on the border with Uganda.

After a verbal exchange, the peacekeepers appeared to open fire before opening the gate, driving on and continuing to shoot while people scattered or hid.

“During this incident, soldiers from the intervention brigade of the MONUSCO force returning from leave opened fire at the border post for unexplained reasons and forced their way through,” the UN mission in Kasindi said in a statement on Sunday.

“This serious incident caused loss of life and serious injuries.”

The Special Representative of the Secretary-General of the UN in the DR Congo, Bintou Keita, said an investigation had begun and the suspected perpetrators arrested.

“Faced with this unspeakable and irresponsible behaviour, the perpetrators of the shooting were identified and arrested pending the conclusions of the investigation, which has already started in collaboration with the Congolese authorities,” she said.

She added that contact had been made with the country of origin of the soldiers so that legal proceedings can be initiated urgently. She did not name the country.

Meanwhile, the UN chief Antonio Guterres said he was “outraged” by the incident and demanded “accountability.” Guterres was “saddened and dismayed” to learn of the shooting by members of the peacekeeping unit, a UN statement said.

Barthelemy Kambale Siva, the North Kivu governor’s representative in Kasindi, earlier said that “eight people, including two policemen who were working at the barrier, were seriously injured” in the incident.

Siva, speaking to AFP news agency, did not say why the UN convoy was prevented from crossing the barrier.

There are more than 120 armed groups operating in the DRC’s troubled east. The UN first deployed an observer mission to the region in 1999.

In 2010, it became the peacekeeping mission MONUSCO – the United Nations Organization Stabilization Mission in the Democratic Republic of the Congo – with a mandate to conduct offensive operations.

There have been 230 fatalities among them, according to the UN.

A total of 19 people, including three peacekeepers, were killed.

Anger has been fuelled by perceptions that MONUSCO is failing to do enough to stop attacks by the armed groups.

UN Under-Secretary-General for Peace Operations Jean-Pierre Lacroix was in the central African country on Saturday to “talk to the Congolese authorities”, he said.

“[They would] examine ways in which we can both avoid a recurrence of these tragic incidents and, above all, work better together to achieve our objectives,” he said.

“We hope that the conditions will be met, in particular the return of state authority, so that MONUSCO can complete its mission as soon as possible – and to leave room for other forms of international support.”