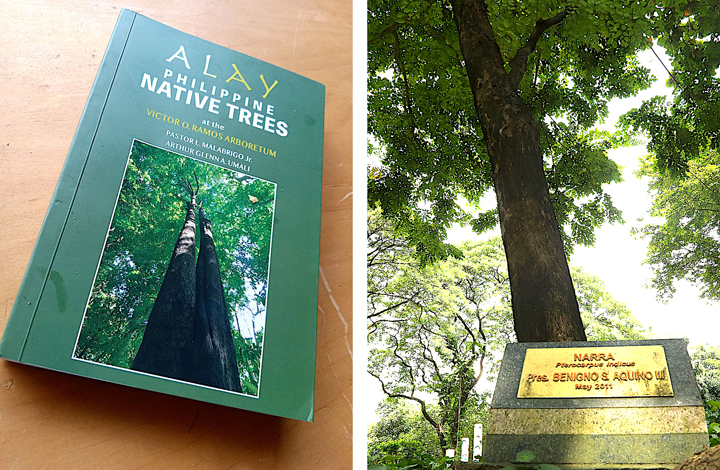 A study on the bark and branch wood of narra tree, a critically endangered species, confirmed its anti-oxidant properties and potential to improve the lives of millions of Filipinos, the De La Salle (DLS) Dasmarinas College of Pharmacy recently bared.

As early as 2002, narra, which is popular among furniture enthusiasts, has been found to have medicinal value and was used as the main ingredient of a dietary supplement to improve the quality of life of those with diabetes, hypertension, arthritis, bladder stones and infectious diseases.

The study, commissioned by Ecarma Health Options, a Filipino health and wellness firm, has once again proven that the forest, nature’s pharmacy, is indeed the key to human survival.

Besides food, clothing and shelter, Filipino ancestors have been using traditional medicines from a concoction of leaves, barks and roots of plants.

Even today, many Filipinos use medicinal plants to cure cough and cold, fight diarrhea by drinking “miracle tea,” or applying them to heal wounds or skin rashes.

Some have even learned to bring nature’s pharmacy in their own backyard, planting them in pots or plots, along with fruit-bearing trees and easy-to-grow vegetables.

Sought for comment, native-tree advocate Arceli M. Tungol told the BusinessMirror that there is so much to learn about not just narra, but other Philippine native trees.

“It is good that research on native trees, such as narra, is now being pursued by the DLS Medical and Health Sciences Institute. There is very slow progress in the research on the potential health benefits and application of medicinal potential of our native trees in a commercial scale,” added Tungol, who created the Facebook Group Philippine Native Tree Enthusiasts.

She said one of the successful research is the cure for cough using the native tree “lagundi” (Vitex negundo).

“We now have an approved cough syrup using the extract from lagundi tree,” she said via Messenger on September 8.

She noted that of Department of Health’s (DOH) 10 herbal medicines, only three—”lagundi, tsaang gubat” and “niyog-niyogan”—are native to the Philippines, while the rest are introduced plants.

“We have over 3,600 native tree species. Our indigenous people depended highly on these in the past for the cure of their ailments. There were no doctors or hospitals nor available pharmacy in the barrios  or forest where they live. These native trees gave them the necessary medicines,” she said.

Tungol lamented that the country’s native trees are unfortunately being pushed to a decline due to massive deforestation to give way to human settlements.

Tungol is part of a group that recently launched the book Alay: Philippine Native Trees, written by Pastor L. Malabrigo Jr. and Arthur Glenn A. Umali.

Launched at the Victor O. Ramos Arboretum in Natividad, Pangasinan, the book, which contains over 300 species of native trees, is “dedicated to the next generation of environmental warriors who can learn from the long histories of these trees and how they can adapt, survive and thrive in our rapidly changing planet.”

Most of the trees in the book are considered endemic, or can only be found in the Philippines but are critically endangered, or considered at high risk of getting extinct.

“Most of the trees are unknown to the public due to lack of awareness and dissemination. The government and the private sector should do an in-depth study of these native trees to maximize their potential use. The more we study and get to know their uses, there is a greater chance of finding the right cure for diseases, while at the same time helping preserve these endangered species from extinction,” Tungol said.

Asean Centre for Biodiversity (ACB) Executive Director Theresa Mundita S. Lim said much of the medicines from nature that we know today are associated with traditional knowledge, applied by Indigenous peoples (IPs) and passed on from one generation to the next.

“It is also this knowledge that provide the means to extract or use the parts and derivatives of native species of plants and animals without having to over-extract them to extinction,” she lamented.

According to Lim, an international biodiversity expert, the appreciation and recognition of the close relationship and interconnection between the traditional lifestyle and practices of the indigenous peoples, and the continuing medicinal benefits that can be derived from the natural ecosystems, is the “first step toward incentivizing protection and retention of indigenous knowledge.”

The ACB has been supporting the protection and conservation of Protected Areas in Asean through the Asean Heritage Parks Programme.

Some of the AHPs, like those in the Philippines, are known to host plant species like “tsaang gubat,” or the Philippine tea tree, “sambong,” and “pansit-pansitan” that can also be found in other Asean countries, where they are known to provide traditional cures for various illnesses.

Lim noted that the Philippines has been one of the successful countries in Asean for recognizing the rights of IPs, because of the Indigenous Peoples Rights Act of 1997, where Free and Prior Informed Consent is already embedded as part of the required processes prior to the utilization of resources within IPs’ lands.

As such, she said that policies must be issued and effectively implemented that will provide incentives for local companies to invest in research and development in producing health and wellness products sustainably derived from nature.

“These support could be through tax breaks, subsidies, or deregulation, for as long as safeguards are in place to ensure that the utilization and production is sustainable, and benefits accrue to those responsible for protecting the resource,” she said.

“Science is just recently proving the presence of medicinal value in narra and other native plants. [Narra’s] healing properties have been known to our grandparents and their grandparents before them way before this decade. It’s sap used to be recommended by village albularyo [herbal doctors] to treat mouth sores in children,” she said.

It should be noted that the Department of Science and Technology, through its Philippine Council on Health Research and Development, has been developing medicines and supplements from local plants and other sources, together with private companies.

Besides lagundi, they have developed tawa-tawa as supplement against dengue, virgin coconut oil for Covid-19, and are more are being developed.

“We casual trekkers often see simple walls of green when passing through forests. But our first-nations people, the Indigenous communities, who call our forests home, can see a treasure-trove of food and medicine. Their knowledge of indigenous plants is unparalleled,” said explorer Gregg Yan.

Yan graduated from Subic Bay’s Jungle Environment Survival Training (JEST) Camp in 2014, where he learned how Aeta survive in the jungle.

“The Aeta or Agta people of Zambales, for instance, boil the leaves of guava, mango, pandan or banaba as calming tea. Their leaves can also be crushed to a paste to disinfect open wounds. Lagundi is a well-known cough remedy. The Taw’buid people of Mindoro use a plant called bungarngar (Chromolaena odorata) to relieve stomach aches,” Yan told the BusinessMirror via e-mail on September 12.

Yan, who frequents the mountains of Mindoro said: “Our forests harbor so many useful plants. A 1984 study by Garan and Quintana identified 128 medicinal plant species used by various Mangyan tribes in Mindoro alone.”

“Our JEST camp teachers also showed us many practical uses for the plants and trees we commonly encounter in the forest,” he said.

He noted that gugo [Entada phaseoloides] often grows near water. Its bark can be soaked and used as a shampoo to clean the hair.

“Did you know that kupang [Parkia javanica], a fairly common tree with distinctive seed pods, can be used as an alternative to coffee? The beans are taken from the seed pods and dried. The dried seeds are roasted and ground before being mixed with hot water. It actually did taste pretty good—like smoky coffee!”