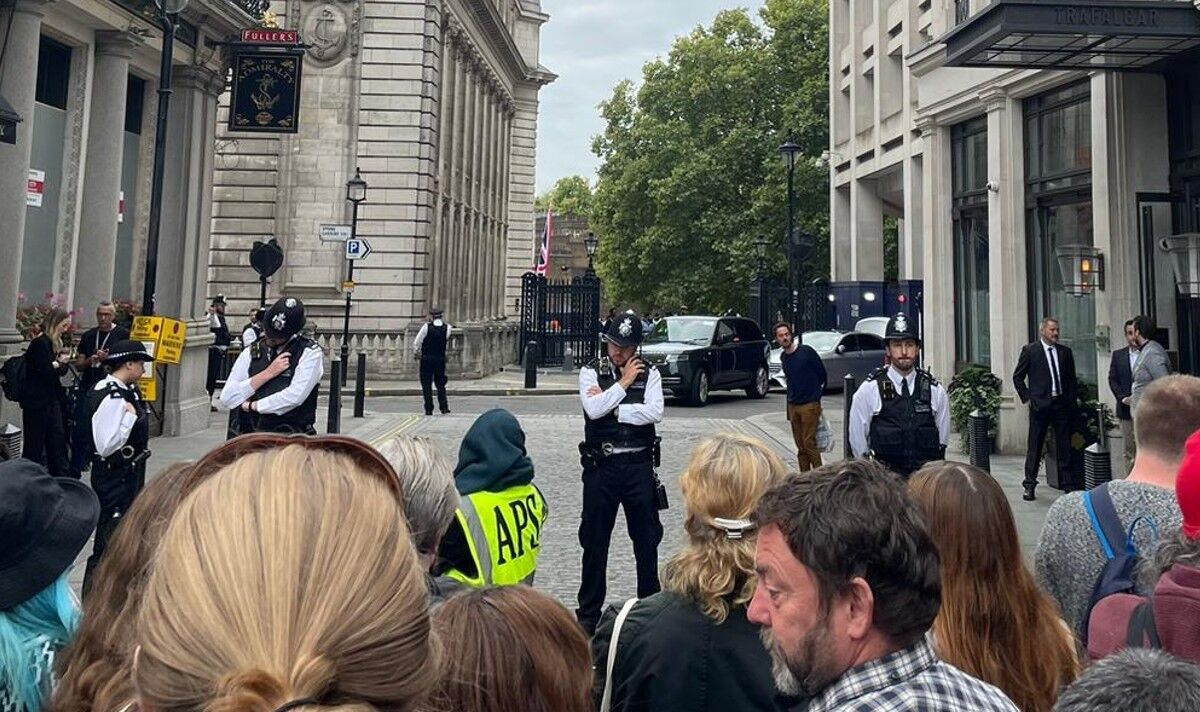 Police have stopped mourners from entering the Mall as a vast swathe of people turn out to catch a glimpse of the monarch before she is laid to rest, according to reports on the ground. Hours before the procession is due to start, people have been stopped from entering from the Trafalgar and Charing Cross directions.

Officers told an Express.co.uk reporter at the scene that security were waiting for the go-ahead to allow more people into the Mall, suggesting crowd control is already posing an issue.

However, crowds gathering near Trafalgar Square were later told that the entrance had closed fully, and that they should move towards Hyde Park.

Some, who said they had been waiting an hour, vented their frustration. One shouted: “Thanks a lot!” Another said: “Could have told us that an hour ago!”

Police on the ground also said the viewing area in Horse Guards Parade was full.

As of 8.55am, police confirmed that Trafalgar Square had been completely closed off.

As of three minutes to 8am, a crowd of around a hundred people had built up on Trafalgar Square, waiting to be let into the historic red-tarmac route.

Just after 8.30am, the crowd was split to allow some vehicles through. Jacinda Arden, the Prime Minister of New Zealand, was seen emerging in mourning dress.

A member of the crowd shouted “we love you Jacinda” as she came out of the car. The crowd was then allow to unsplit, but was still being held.

The day of the Queen’s funeral marks the climax of what is being regarded as the biggest security operation the UK has ever seen, after the monarch was taken on several processions through Edinburgh and London, as well as lying in state.

He described it as the “largest policing operation” in the Met’s history. Monday signals the “final and most complex phase” of the operation after the death of the monarch, he said.

The scale surpasses the operation for the Platinum Jubilee weekend and the London 2012 Olympics, which saw up to 10,000 police officers on duty per day.

It is also the largest global protection operation dealt with by the force, with world leaders, dignitaries and other VIPs attending the state funeral.

Former counter-terrorism police chief Nick Aldworth said it is “probably the biggest operation that we’re likely to mount in the UK”.

It comes at a time when the country’s terrorism threat level stands at “substantial”, meaning an attack is believed to be “likely”.