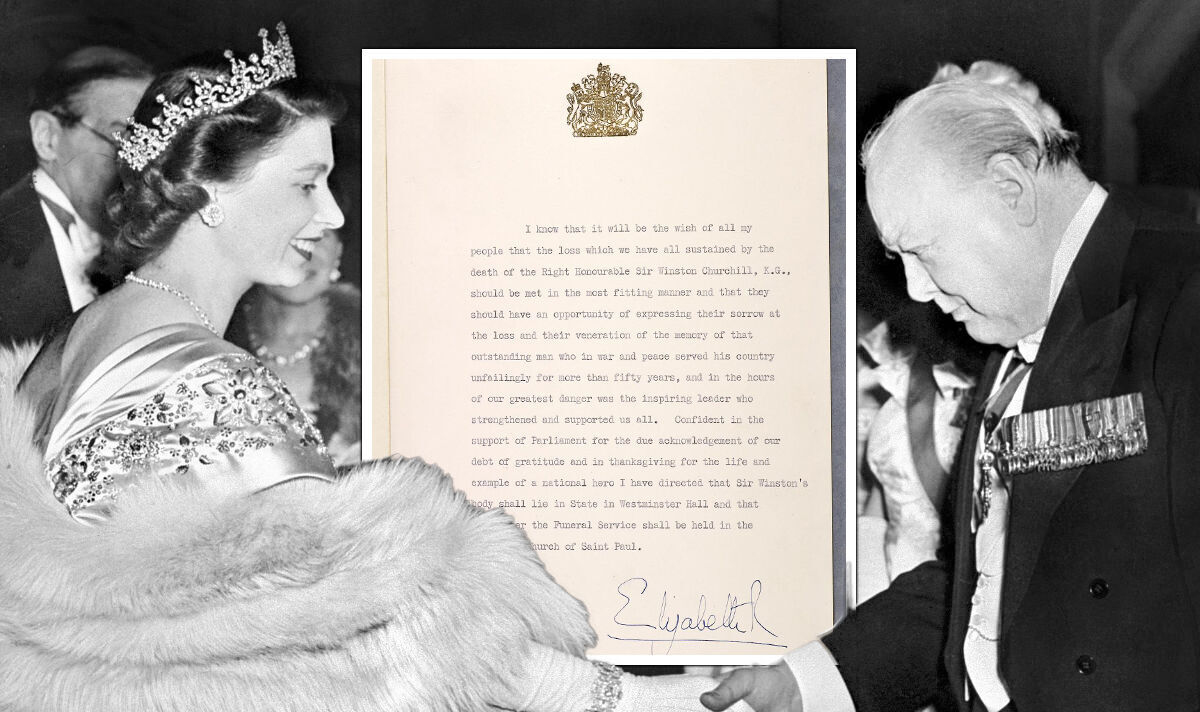 Sir Winston Churchill was the first Prime Minister to form a Government on behalf of Queen Elizabeth II, and her respect for the wartime leader was apparent. The young Queen personally requested he be given a state funeral, and broke royal custom in the manner in which she attended the service in St Paul’s Cathedral, too. The UK was not to know a comparable ceremony until the Queen’s own funeral on Monday, September 19, 2022.

Sir Winston Churchill was Prime Minister when the Queen ascended to the throne in 1952, becoming the first of 15 she would meet during her reign.

Six days later he was honoured with a state funeral in St Paul’s Cathedral.

To this day, he remains one of only three British Prime ministers to have received a state funeral – along with Arthur Wellesley, 1st Duke of Wellington and William Gladstone.

Traditionally, state funerals are reserved for the monarchy – but even those of the Queen Mother and Prince Philip were of a lower-ranking ceremonial description.

State funerals are conducted according to strict protocol and are a public ceremony held in honour of a person of national significance. Paid for by the public, they require the assent of both the Crown and Parliament.

Arrangements for Sir Winston Churchill’s funeral were planned years in advance under the codename Operation Hope Not.

However, the Queen personally wrote to Parliament to express her desire that the entire nation should “have the opportunity to express their sorrow” over his passing.

In her letter to MPs, the Queen wrote: “I know that it will be the wish of all my people that the loss which we have all sustained by the death of the Right Honourable Sir Winston Churchill should be met in the most fitting manner and that they should have an opportunity of expressing their sorrow at the loss and their veneration of the memory of that outstanding man who in war and peace served his country unfailingly for more than fifty years, and in the hours of our greatest danger was the inspiring leader who strengthened and supported us all.”

She added: “Confident in the support of Parliament for the due acknowledgement of our debt of gratitude and in thanksgiving for the life and example of a national hero I have directed that Sir Winston’s body shall lie in state at Westminster Hall and thereafter the funeral service shall be held in the Cathedral Church of Saint Paul.”

In another break from precedent, the young Queen attended the funeral in person, along with most of the Royal Family, and didn’t follow the usual procedure for royalty in such events.

According to the 2018 Channel 5 documentary Elizabeth: Our Queen, the monarch put “her royal privilege aside”.

However, exceptionally, at Sir Winston Churchill’s funeral the Queen took her place in St Paul’s before the wartime Prime Minister’s family and before his coffin was brought into the church. After the service, she followed the family out of the cathedral.

Sir Winston Churchill’s grandson, Sir Nicolas Soames, explained in the documentary what this break from royal protocol meant to his family.

He said: “It is absolutely exceptional if not unique for the Queen to grant precedence to anyone. For her to arrive before the coffin and before my grandfather was a beautiful and very touching gesture.”

Witnessed by an estimated worldwide television audience of 350 million people, the service was attended by 6,000 people including European royalty and 15 heads of state.

During Sir Winston Churchill’s lying in state in Westminster Hall, an estimated 320,000 people filed past his coffin to pay their respects in a queue that reached three miles in length.

Writing for the Daily Mail, Vincent Mulchrone memorably wrote: “Two rivers run silently through London tonight, and one is made of people. Dark and quiet as the night-time Thames itself, it flows through Westminster Hall, eddying about the foot of the rock called Churchill.”

During the lying in state of Queen Elizabeth II – which closed early on Monday morning just hours before her funeral took place – up to a million people are estimated to have passed by her coffin.

The funeral was the first held for a British monarch in Westminster Abbey since 1760, and counted hundreds of the world’s foremost political leaders and royals among its attendees.

Following a record-breaking reign, Her Majesty’s funeral service is expected to be the most watched television broadcast in history.