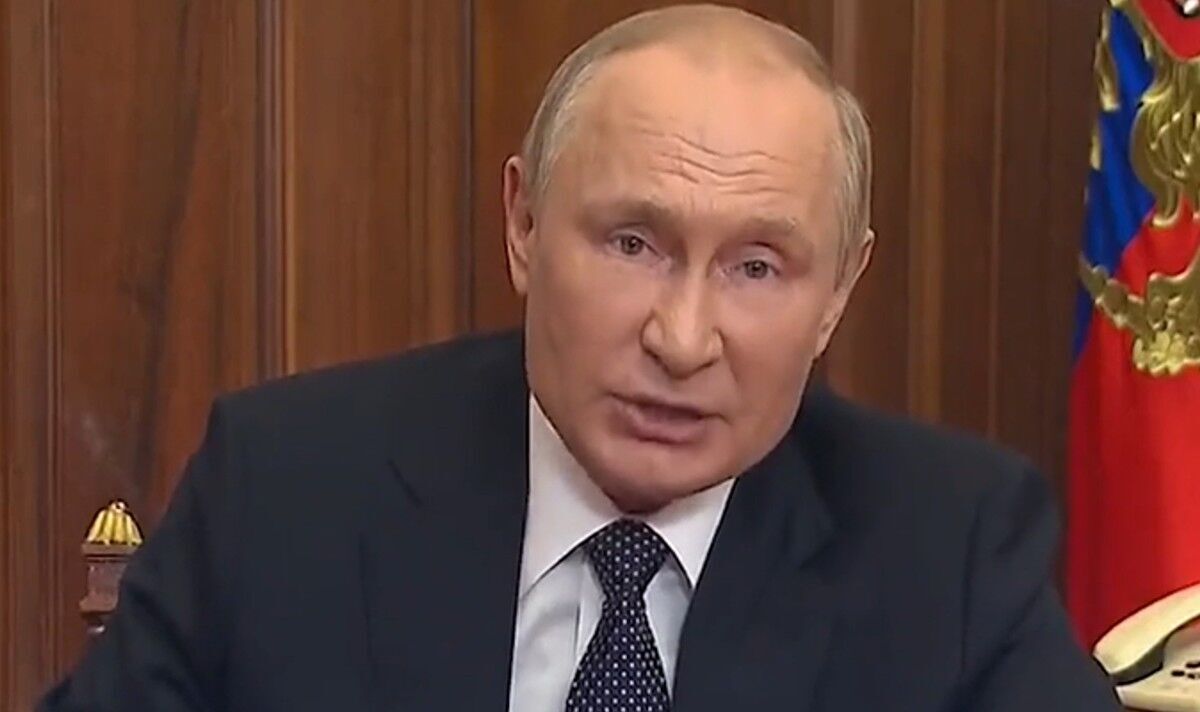 Vladimir Putin attempted to “intimidate and scare” with his televised address today, according to a body language expert. The Russian President announced a partial military mobilisation with 300,000 reservists set to be called up for his invasion of Ukraine in response to a fierce counter-attack.

Putin also warned Moscow would use “all the means at our disposal” to protect itself in a nuclear threat to the West.

Body language expert Judi James said the Russian leader attempted to “intimidate and scare” with his speech on Wednesday.

Ms James highlighted Putin’s “displays of anger and disgust” and “sneers of disgust”.

She added that the Russian President lent forward in a bid to “engage directly” before making a “threatening stare straight into the camera”.

The body language expert told Express.co.uk: “Putin’s body language looked designed to intimidate and scare with what looked like displays of anger and disgust followed by a sustained threatening stare straight into the camera.

“He leans forward to engage directly and his mouth often pulled into sneers of disgust or a baring of the lower teeth in a jaw-jut of anger.

“His hands were still in the pose of holding the table although the left one did get raised in a chopping gesture.

“His only softer signal was a slight shrugging of the shoulders as though to imply none of his threats were his fault.”

Putin’s speech comes as Moscow-controlled regions in eastern and southern Ukraine are set to hold referendums on becoming parts of Russia.

The move could spark a wider war as it gives the Kremlin the pretext to claim parts of Russian territory are being attacked.

The Russian President insisted “it’s not a bluff” in his speech as he vowed that Russia would use nuclear weapons if its territory was threatened.

He accused the West of “nuclear blackmail” and claimed “high-ranking representatives of the leading Nato states” had talked about the possibility of using weapons of mass destruction against Russia.

He added: “To those who allow themselves such statements regarding Russia, I want to remind you that our country also has various means of destruction.”

Prime Minister Liz Truss, who is in New York for the UN General Assembly, has accused Putin of “sabre rattling”.

Defence Secretary Ben Wallace said Putin’s actions were “an admission that his invasion is failing”.

He added: “No amount of threats and propaganda can hide the fact that Ukraine is winning this war, the international community are united and Russia is becoming a global pariah.”

A British defence intelligence update suggested Putin is being forced to undermine his own public position that the war in Ukraine was a “special military operation” rather than a full-scale conflict.

The Ministry of Defence said: “These new measures have highly likely been brought forwards due to public criticism and mark a further development in Russia’s strategy.

“Putin is accepting greater political risk by undermining the fiction that Russia is neither in a war nor a national crisis in the hope of generating more combat power.”