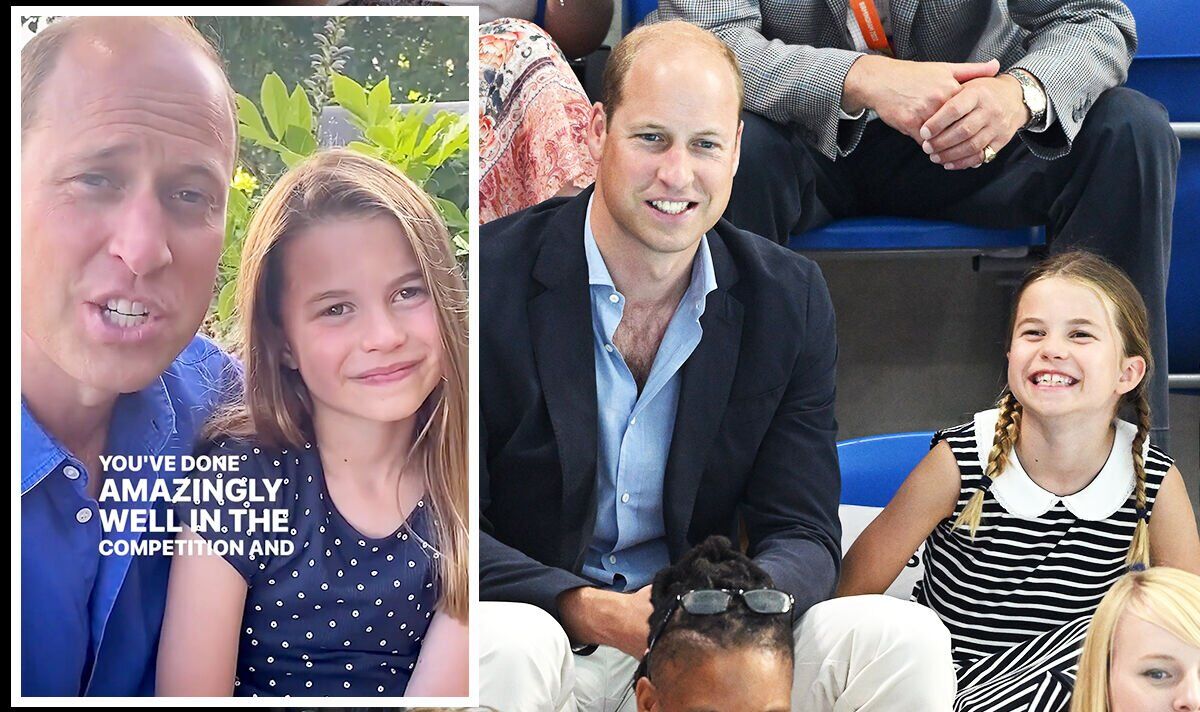 Just ahead of the England women’s Euros finals against Germany on Sunday, the Duke and Duchess of Cambridge’s Instagram account shared a video from the prince and his only daughter. In a short snippet posted by the account, the Duke said they “both want to wish the Lionesses the best of luck tonight”.

He added: “You’ve done amazingly well in the competition, and we’re rooting for you all the way.”

Princess Charlotte then quipped at the end: “Good luck, I hope you win. Bye!”

In the caption, the account described the Cambridge family as “cheering” for the women’s team, as well as adding an extra “good luck” wish.

But royal commentator Daniela Elser saw the video as an emblem of how the lives of the young royals have changed, particularly since the Duke was the same age as his middle child.

She described a “pattern emerging” when comparing the roles of Prince William and Charlotte at the same age, pointing to the explosion of social media in the decades since the Duke’s childhood.

When the Duke of Cambridge hit seven years old, Ms Elser said, he “took part in the carriage procession for Trooping the Colour and the later Buckingham Palace balcony waving session, appeared at the Beating Retreat military parade, and was photographed attending two weddings”.

He was also snapped with Prince Harry on the Duke of Sussex’s first day of school.

Ms Elser wrote in the New Zealand Herald: “Contrast that with the 12 months to date for Charlotte.

READ MORE: Kate and Prince William urged to ‘give up favourite perk’

“In August last year she appeared in a Duke and Duchess of Cambridge Instagram post about a conservation effort called the Big Butterfly Count; there was the family’s Christmas card image, snapped during a private holiday to Jordan, that was shared widely; she attended the memorial service for her Great Grandfather Prince Philip in March and the royal Easter service in April, before the usual birthday shots of her were released in May.”

She added: “Come June, Charlotte and her siblings took part in their first Trooping the Colour, did the balcony waving thing, undertook her first official engagement with her parents and George in Cardiff where she participated in an official walkabout, before taking centre stage with her family during the Platinum Jubilee Pageant, along with filming a video baking cakes with Kate, George and Louis.”

With social media comes a “totally new sort of royal childhood”, with a host of different expectations, Ms Elser argued.

She wrote: “Watching the video, something occurred to me.

“Here we have the future king delivering his lines with genuine warmth and enthusiasm and a small child staring down the barrel of a totally new sort of royal childhood.”

Ms Elser described this new royal upbringing as “one where she and brothers Prince George and Prince Louis won’t just be obligated to occasionally appear in public but will be required to help churn out the social content needed to keep the monarchy afloat”.

As the Cambridges’ three children have grown older, they have begun to pop up at more and more royal engagements.

The Duke and Duchess of Cambridge attended Tuesday’s Commonwealth Games action with Princess Charlotte in tow.

The young royal watched animatedly at the Sandwell Aquatics Centre in Birmingham, along with the Earl and Countess of Wessex.

Previously, Prince George made an appearance on the Duke and Duchess of Cambridge’s Instagram account at another sporting event of the summer.

The eldest Cambridge child, who is third in line to the throne, joined his parents for the dramatic Wimbledon final last month.

He then starred in the couple’s photos, posted just after the event, in which he could be seen meeting officials at the All England Club and clapping from the stands.