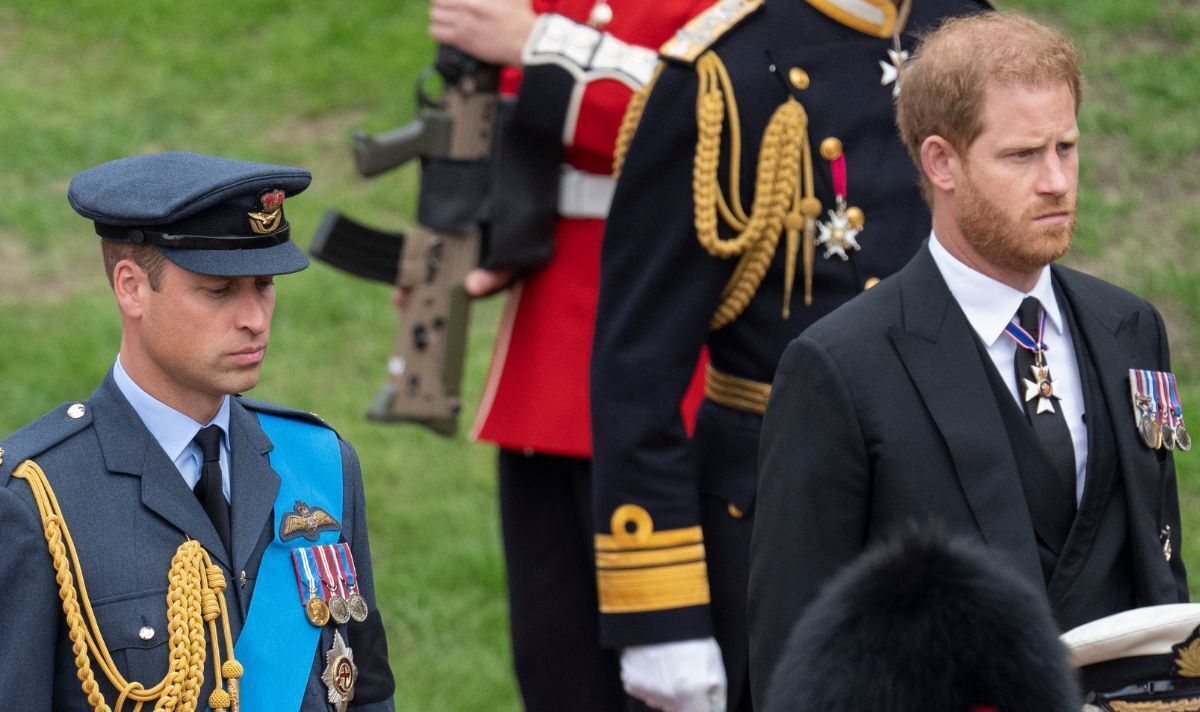 A small gesture from the Prince of Wales could signal a feud breakthrough with brother Prince Harry. As the royals awaited Her Majesty’s cortege yesterday, Prince Harry appeared to be physically ostracised from the group, including Prince William. The brothers are thought to have had a strained relationship since before the Duke and Duchess of Sussex moved to the USA following their departure from royal life. However, a body language expert has claimed that Prince William gave Harry a telling gesture which could be a sign of a breakthrough.

Photos of the Royal Family awaiting the funeral cortege carrying Her Majesty’s coffin show King Charles III Prince Andrew, Princess Anne, and Prince William among other royals who walked in the procession.

A clear group has formed around the King while another group is seen speaking with the Earl of Snowden – Prince Harry appears to stand on his own.

Body language expert Judi James said: “Harry looks physically excluded or sidelined in this grouping with some royals gathering around Charles while the others stand with the Earl of Snowdon, almost with their backs turned to Harry.

“The one moment we have not seen during this visit, despite Charles’s warm words during his speech, is any form of physical meeting between Harry and his father Charles.”

Ms James notes that in one of the photos, Prince William can be seen looking over towards his brother, even appearing to edge closer to him, in a sign that there may be hope the brothers can repair their relationship.

She told The Mirror: “All the attention has been on Harry and William but they have performed a couple of forced-looking chatting rituals in the past, and in the Oprah interview it seemed to be his father that received all the really negative body language responses from Harry, rather than William.

“William does seem to have hung back slightly here, which could hopefully be prompted by empathy and the brothers might just be looking in each others’ direction and even speaking, even if their body language is not mirrored as usual.

“Hopefully these images outside do signal a breakthrough in terms of the sibling relationship and once the funeral is over and there is no risk of dragging sibling soap operas into the spotlight there might be one last sign of some sort of a reunion.”

There have been reports that their relationship began to sour ahead of the Sussexes wedding in 2018 when Prince William reportedly raised concerns about the fast-moving relationship.

Tensions reached a breaking point when Prince Harry claimed that his brother was “trapped” in the Royal Family during a bombshell interview with Oprah Winfrey.

He also said during the explosive interview that his father King Charles had cut him off financially.

There was little to no eye contact between the brothers during the ceremonies at the state funeral for the Queen and no words appeared to have been exchanged on camera.

Prince Harry was wearing a morning suit with his medals pinned to it as opposed to a military uniform, the dress typically worn by working members of the Royal Family.

When the coffin was taken into Westminster Abbey Prince Harry and Prince Andrew, who has also stepped down as a working Royal following his BBC Newsnight interview about his friendship with paedophile Jeffrey Epstein, looked at the ground while the rest of the Royal Family saluted.

When Prince William and Prince Harry were joined inside the abbey by their wives, Meghan and Kate, their was similarly very little contact between the two families.

However, at St George’s Chapel, Prince Harry caught his niece Princess Charlotte’s eye, who he was seated next to, and smiled.

The Sussexes are reportedly preparing to leave the UK following Her Majesty’s funeral as they have been away from their children, Archie and Lilibet, for more than two weeks time.