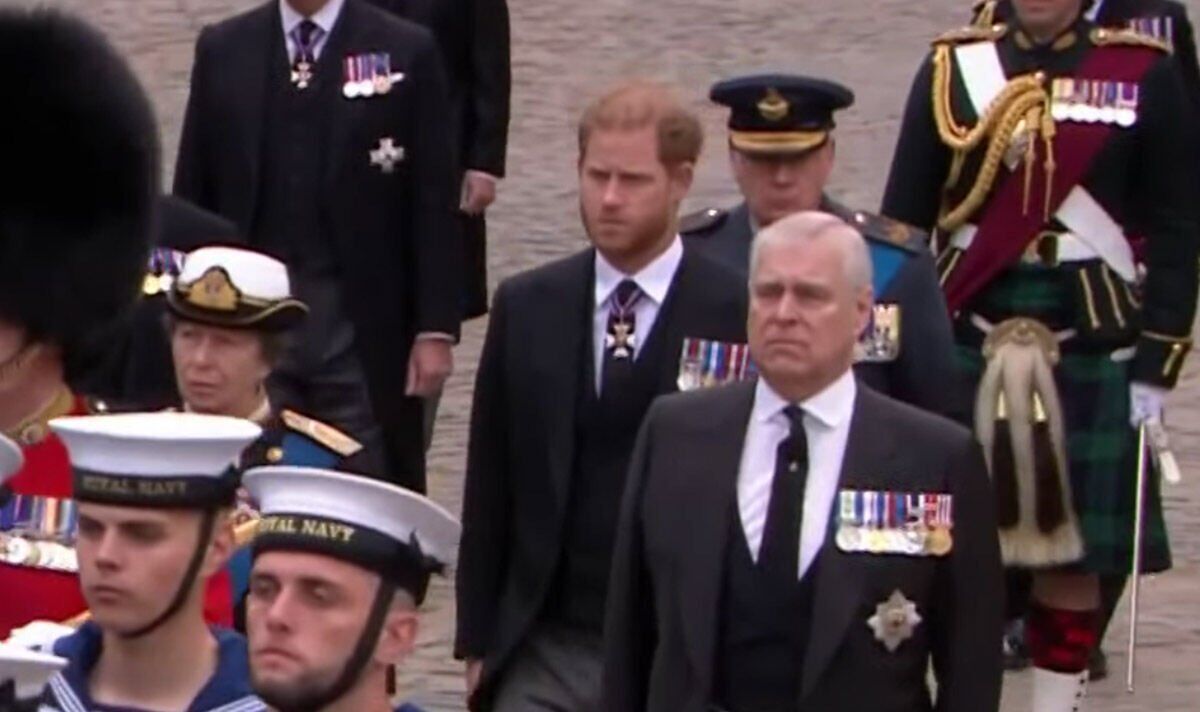 Prince Harry and Prince Andrew did not wear military uniform as they took part in the funeral procession alongside other royals this morning.

The State Gun Carriage carrying the Queen’s coffin has begun its journey from the Palace of Westminster to Westminster Abbey ahead of the service at 11am.

The coffin has been draped in the Royal Standard and carries the Imperial State Crown and a wreath of flowers containing plants from the gardens of Buckingham Palace, Clarence House and Highgrove House.

Leading the procession are around 200 pipers and drummers of Scottish and Irish Regiments, the Brigade of Gurkhas and RAF.

Walking behind the carriage are the King and his siblings, followed by the Prince of Wales, Duke of Sussex and Peter Phillips.

As non-working royals, Harry and Andrew did not wear their military garb.

It comes after the Queen’s lying in state period at Westminster Hall ended at 6.30am.

Chrissy Heerey, who was the last member of the public to leave the Hall, said: “It’s one of the highlights of my life and I feel very privileged to be here.”

The doors of Westminster Abbey opened at 8am as the first guests began to arrive ahead of the service at 11am.

Heads of state, prime ministers and presidents, members of European royal families and key figures from public life are gathering at the Abbey to say a final farewell to the nation’s longest-reigning monarch.

US President Joe Biden and First Lady Jill Biden walked through the doors shortly after 10am, while French President and his wife Brigitte are in the congregation.

Millions of people across the country will watch the service on television on what is a national bank holiday in Britain.

Crowds lined the streets of central London ahead of the funeral on what will be a solemn day of pomp and pageantry.

All public viewing areas for the funeral procession in the capital were full by just after 9am.

Westminster Abbey’s tenor bell started to toll at 9.45am once per minute for 96 minutes in a nod to the years of the Queen’s life.

The coffin was taken in a grand military procession from the Palace of Westminster to the Abbey for the funeral.

Following the service, which ends at approximately noon, the coffin will then be taken in procession to Wellington Arch and then travel to Windsor.

Once there, the hearse will travel in procession to St George’s Chapel at Windsor Castle via the Long Walk, after which a televised committal service will take place.

Later in the evening, there will be a private interment service with members of the Royal Family.

The Queen’s final resting place will be the King George VI memorial chapel, an annex to the main chapel – where her mother and father were buried, along with the ashes of her sister, Princess Margaret.

Her beloved husband Prince Philip’s coffin will move from the Royal Vault to the memorial chapel to join his wife.