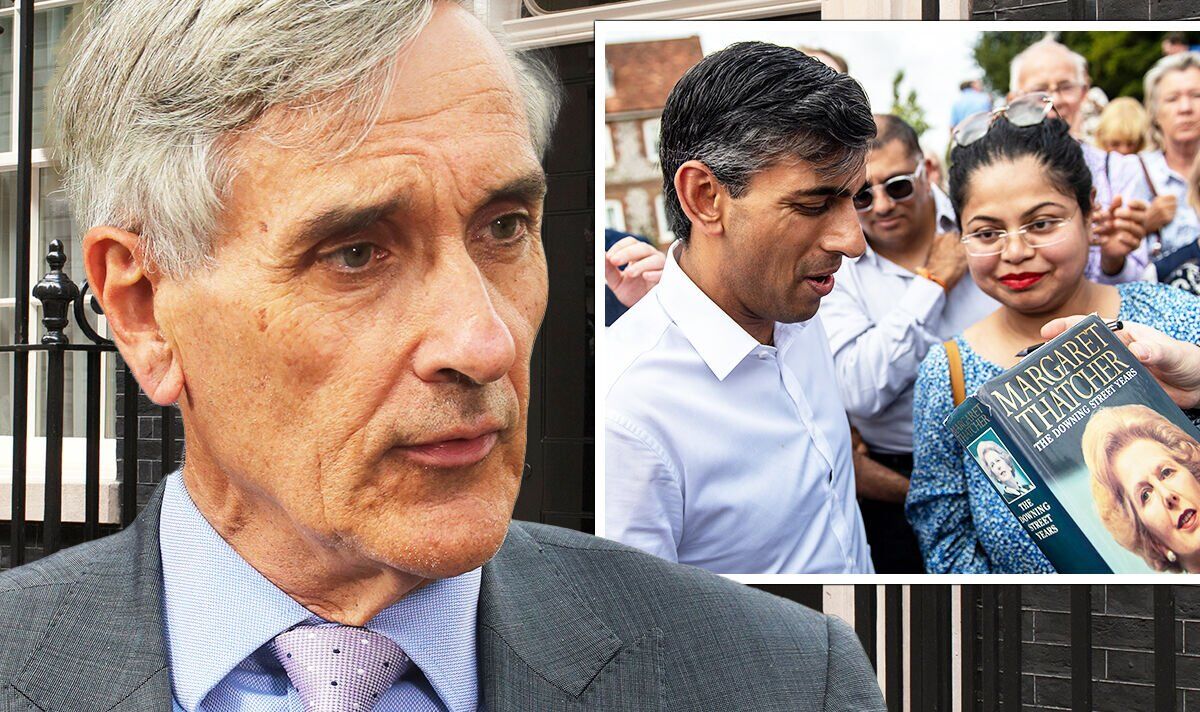 The former cabinet minister, who headed up Margaret Thatcher’s policy unit in the 1980s, took to Twitter to lambast Mr Sunak over his latest pledge to slash income tax by 4p in the pound to a basic rate of 16p. Sir John was one of several high profile backers of Liz Truss’s leadership campaign to suggest the move by the former Chancellor was a cynical ploy as ballot papers for the next Tory leader drop with members today.

Mr Sunak has been criticised for raising taxes to their highest level in 70 years as Chancellor in a bid to pay off the Covid pandemic debt and NHS backlog.

And, early in the campaign, he lambasted Ms Truss’s plans for £30 billion of tax cuts – at one point describing it as “socialism”.

But Sir John Redwood, who is being pushed by Brexiteers as Ms Truss’s potential Chancellor, was unimpressed with Mr Sunak’s latest pledge.

He said: “Rishi Sunak is no Margaret Thatcher. He imposed a new social care tax, on line tax, excess profits tax. He upped National Insurance, made many Income taxpayers pay a higher rate and hiked business tax rate by 31 percent. As candidate he tries to  rebrand as a tax cutter!”

Later, he added: “Rishi’s last tax flip flop did not work. So now he tries a bigger flip flop. The problem is with his record of massive tax rises when in power many people do not believe him when he says he is now a tax cutter.”

Other high profile MPs on the right also suggested the former Chancellor may be trying to woo party members at the final minute after his campaign had been faltering.

Former Brexit minister David Jones Tweeted: “Don’t think it will be lost on @Conservatives members that the tax cut ‘pledge’ comes at the beginning of the week when ballot papers drop through their letterboxes. They tend to notice that sort of thing. Who the heck is advising Rishi?”

Meanwhile, Mr Sunak’s former deputy Simon Clarke, the Chief Treasury Secretary, insisted that despite the eye catching nature of his pledge, the tax cuts would take too long.

He said: “We cannot afford to wait to help families, they need support now. Liz will cut taxes in seven weeks, not seven years.”

This is the second supposed U-turn on taxes after he also pledged to take VAT off fuel bills.

Mr Sunak’s plans are to have an overall tax cut of 20 percent by the end of the decade.

He called the pledge “the biggest income tax cut since Margaret Thatcher’s government” and claimed that it was a realistic promise in the current economic climate.

He added: “I will never get taxes down in a way that just puts inflation up.”

And he promised to “always be honest about the challenges we face”.

DON’T MISS
Truss, Sunak, Starmer or Rayner? – Who do YOU trust to govern the UK? [REACT]
‘Don’t be surprised at Tories springing a leadership contest shock’ [INSIGHT]
Truss storms ahead of Sunak as voters back her plan to slash taxes [REVEAL]