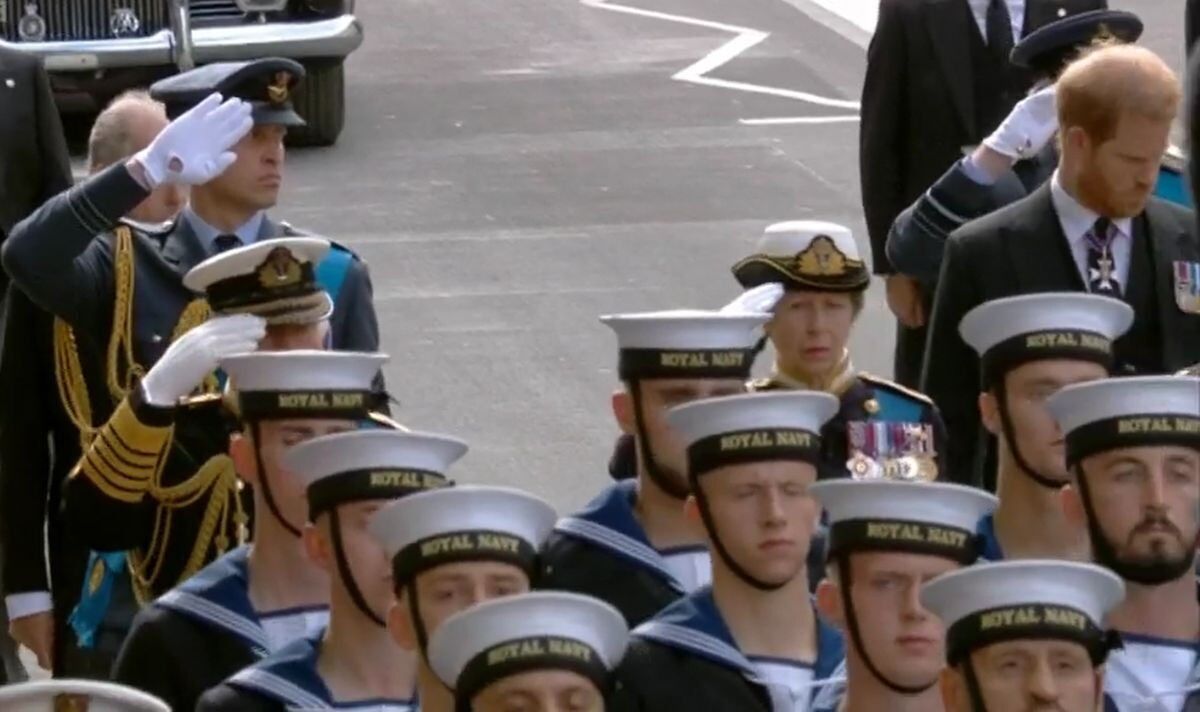 As the Queen’s funeral procession moved past the Cenotaph in London, the King, the Prince of Wales, the Princess Royal and the Earl of Wessex saluted the memorial to Britain and the Commonwealth soldiers killed in the First and Second World Wars. As the Queen’s children and some grandchildren stood in formation behind the gun carriage that would carry the Queen to her funeral, only boots tapping in unison on the cobbles and briefly shouted military orders broke a respectful silence outside Westminster Hall. Twelve days after the nation’s longest-reigning monarch died, the last steps of her journey towards her final resting place began in New Palace Yard with a procession to Westminster Abbey.

Crowds which gathered close to Parliament Square early on Monday had clapped and cheered the arrival of the King, who was driven to Westminster Hall just after 10.30am to escort his mother’s coffin to the funeral.

But just minutes later, as the new monarch stood in line with his siblings the Princess Royal, Duke of York and Earl of Wessex, behind the State Gun Carriage of the Royal Navy, there was silence.

The crowd, momentarily still and with phones held up to capture the historic moment, was around 10-people thick in places, as tens of thousands thronged the streets to say goodbye to the monarch.

Cousins the Prince of Wales, Duke of Sussex and Peter Phillips all followed behind the coffin, for the short walk to the Abbey.

While the King and most other royals wore military uniform, Andrew and Harry sported suits in line with the fact neither are any longer working royals.

The Queen’s closest family all looked sombre as they followed the 123-year-old carriage ahead of the state funeral.

The procession included Anne’s husband Vice Admiral Sir Tim Laurence, the Queen’s cousin the Duke of Gloucester, and her nephew the Earl of Snowdon.

A Royal Navy chef held back tears as he spoke of his pride at being among the military personnel taking part in the Queen’s state funeral.

Leading Steward Andrew Lyons, 52, who has been with the service for 26-and-a-half years, is among those who are lining the route near Windsor Castle, Berkshire, before the Queen is laid to rest.

He added: “She is a team member. It is family and my generation will understand this. The youngsters will come to terms with it.

“Hopefully they will feel the same when King Charles takes over. I hope they do because he is just as good. “

Taking part in the official events marking the Queen’s death and the new reign of King Charles III has been a family affair for Air Specialist Freddie Stringer, 20, of the Royal Air Force.