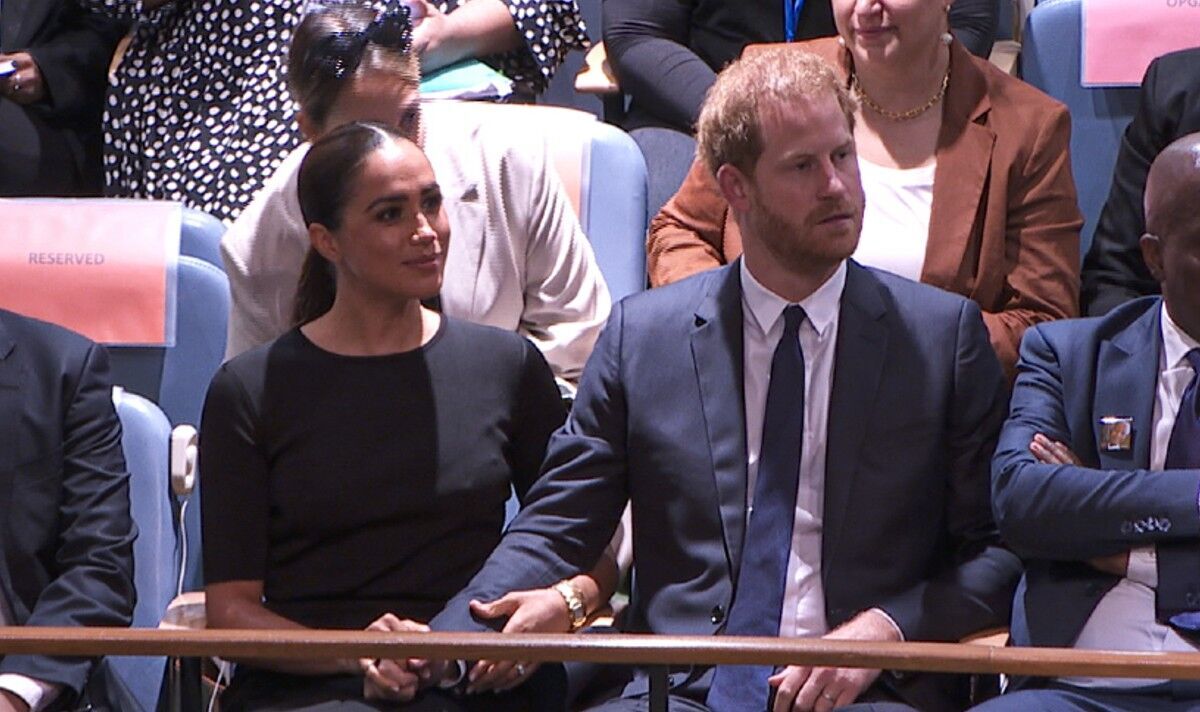 The Duke and Duchess of Sussex most recently stepped out together in New York as Prince Harry, 37, delivered a speech to the UN. During his speech, Prince Harry said he associated Africa with both his mother and his wife, calling the latter his “soulmate”.

He said the continent was a place of “solace” for his after the death of his mother, and he later whisked Meghan off for a whirlwind trip to Botswana early in their relationship.

Meghan, 40, watched on from the crowd, and was seen to stay very close to her husband before and after his keynote address.

But the interactions show key parallels with how Princess Diana behaved in the royal spotlight, body language expert Darren Stanton has said.

He described how Meghan’s willingness to display her feelings in public or in view of cameras was reminiscent of the openness of the late Princess of Wales.

He told The Mirror: “Similarly to Princess Diana, Meghan isn’t afraid to show her emotions.

“There’s been plenty of times she and Harry have displayed affectionate gestures towards one another publicly, holding hands and being tactile, touching each other’s elbows or back – intimate areas to touch.”

Mr Stanton then described how the placement of Meghan’s hands in public revealed a changing dynamic in the Duke and Duchess of Sussex’s relationship.

He painted a picture of a “confident” and “strong” Meghan from the outset, and it is “clear” that the Duchess “loves Harry very much”.

He then pinpointed gestures Meghan often displays to make Harry “feel at ease” in public and “boost Harry’s confidence”.

He said: “She very much plays the role of his biggest supporter in their relationship, with Meghan on hand to boost Harry’s confidence in situations where he isn’t feeling as self-assured.

“Over the years we’ve seen many tell-tale gestures of Meghan helping Harry to feel at ease, like her touching his elbow when they’re out at engagements or holding his hand or arm to give reassurance.

“Another way Meghan shows Harry she is on hand to support him is by subtly placing her hand on his back – both a protective and comforting gesture.”

But there is one “tell-tale sign” of the strength of their relationship, according to Mr Stanton.

He revealed: “A tell-tale sign that shows how deeply Meghan is in love with Harry is the way she looks at him with a fixed gaze.

“When Harry is talking or engaged in an activity, you’ll notice Meghan is transfixed on him, staring at him adoringly – a sign of reciprocal liking and sharing a deep rapport with someone.”

Meghan is Harry’s “rock” in the Duke’s eyes, Mr Stanton argued, and although the Duchess “was previously used to being the centre of attention, she is more than content letting Harry take centre stage”.