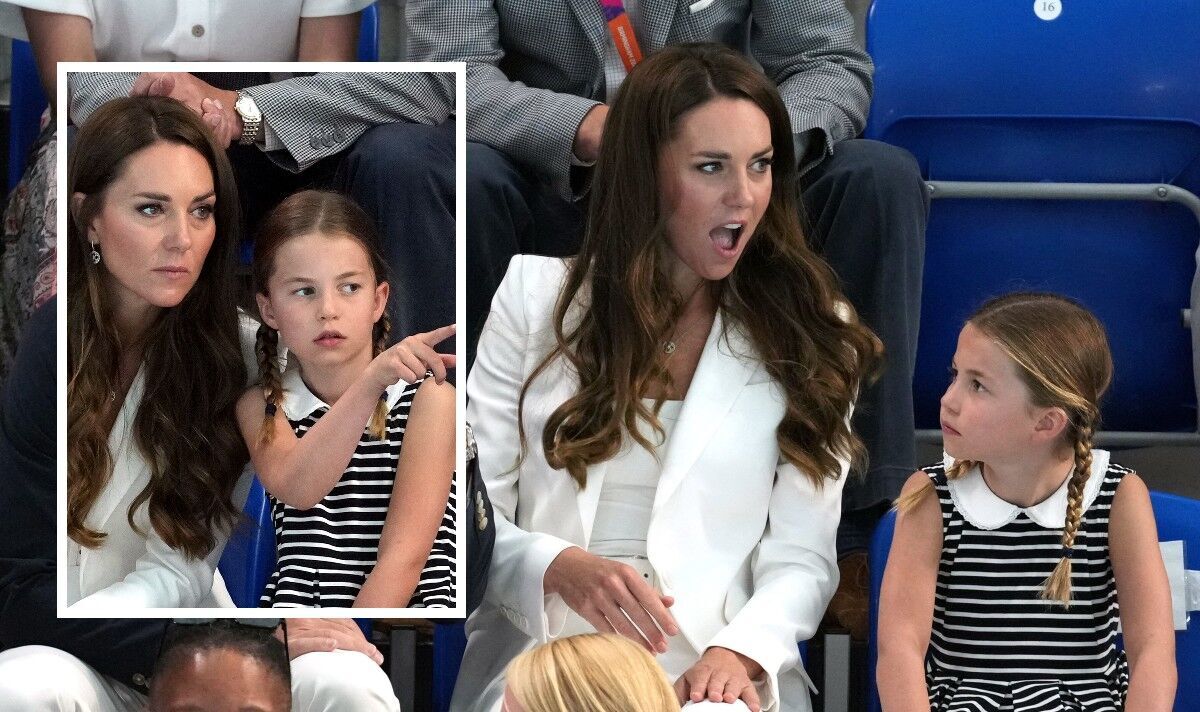 Kate and Prince William headed to Birmingham this morning to watch some of the events taking place at the Commonwealth Games hosted in the Midlands city. To the delight of royal fans, they also brought along seven-year-old Princess Charlotte.

While the three royals watched swimming events at the Sandwell Aquatics Centre, Charlotte was spotted chatting with her parents and asking questions.

In one snap taken during their attendance, the Duchess was caught with her mouth wide open as she watches the ongoing event, while her adorable daughter looks up.

In another picture, Kate appears to be explaining to her daughter what is happening during the event.

For this unannounced outing, Princess Charlotte donned a nautical-inspired striped blue and white gown with a white collar paired with white sandals.

Looking particularly sweet, she had her hair styled into two braids.

Kate, on the other hand, wore an all-white outfit, which included a pair of skinny trousers and a blouse.

This appearance marked Kate and William’s first appearance at this year’s Commonwealth Games.

READ MORE: Meghan and Harry’s biographer’s new book to ‘have the world talking’

It also represented a huge milestone for Princess Charlotte, as she had never attended an official engagement without her siblings before.

The Cambridges aren’t the only royals in attendance at the Games today.

Sophie, Countess of Wessex, Prince Edward and their two teenage children were sitting right behind the three royals at the centre.

The family of four were also spotted earlier this morning at Alexander Stadium to watch the Athletics Track and Field events.

Given Edward’s role as vice-patron at the Commonwealth Games Foundation (CGF), the Countess and Earl have been attending several sporting events over the past few days.

On Thursday, they joined Prince Charles and Camilla, Duchess of Cornwall, to attend the stunning Opening Ceremony.

On the following day, they were spotted watching a rugby sevens match in the company of Princess Anne and her husband Sir Timothy Laurence.

On August 1, they delighted royal fans by having their children Lady Louise Windsor and James, Viscount Severn, coming along with them as they watched an array of events – including women’s weightlifting, boxing matches and badminton.

Princess Charlotte’s presence in Birmingham will quash the disappointment some royal fans experienced on Sunday.

Many were hoping the seven-year-old would accompany her father Prince William at Wembley Stadium to watch the Women’s EURO final between England and Germany.

However, the child watched the match from home, surely delighted by the Lionesses’ victory.

Hours prior to the final, Charlotte had sat down with her father to film a brief clip, in which she wished the English team good luck.

The fourth-in-line to the throne is believed to love sports.

In June, when William visited the Lionesses training ahead of the EURO tournament, he relayed to them a message from his daughter, saying: “Charlotte wants me to tell you she’s really good in goal – a budding star for the future. She said please can you tell them that and I said ‘ok, I’ll tell them’.”

In 2019, during an investiture ceremony at Buckingham Palace, Prince William told Eileen Fenton — the first woman to complete the Cross Channel Swimming Race in 1950 – they were a family of swimmers, including his young children.

She reported: “He said that he and his wife make sure the children can swim and they all go and they swim quite well.”