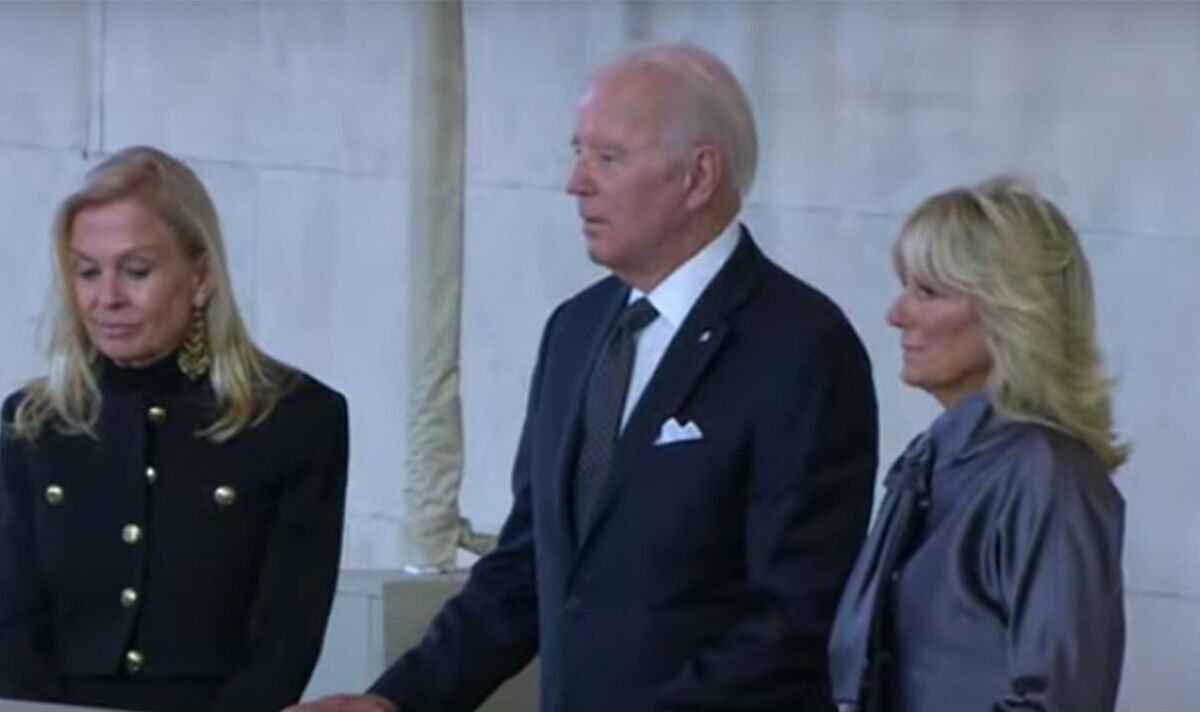 Joe Biden, joined by his wife, Jill, has visited the coffin of Queen Elizabeth II in Westminster Hall. Her Majesty died last Thursday at the age of 96 at Balmoral, which is understood to have been among her favourite residences.

She has been lying in state in the Houses of Parliament since Thursday, allowing thousands upon thousands of individuals to file past her coffin and pay their respects.

These numbers have today been joined by the US President and First Lady, who stood on a raised platform in the hall to pay their respects.

Footage shows Mr Biden making a sign of the cross while standing before Her Majesty’s coffin.

He arrived in the UK late last night ahead of the Queen’s state funeral, which will be held tomorrow, on September 19.

Mr Biden said of Elizabeth II that Her Majesty “defined an era”.

At this time, his Irish American mother instructed him: “Don’t you bow down to her.”

He did not, according to CNN – and neither did he when he met the Queen as President last year.

In a statement following the Queen’s death, Mr Biden said: “In a world of constant change, she was a steadying presence and a source of comfort and pride for generations of Britons, including many who have never known their country without her. An enduring admiration for Queen Elizabeth II united people across the Commonwealth.

“The seven decades of her history-making reign bore witness to an age of unprecedented human advancement and the forward march of human dignity.

“She was the first British monarch to whom people all around the world could feel a personal and immediate connection—whether they heard her on the radio as a young princess speaking to the children of the United Kingdom, or gathered around their televisions for her coronation, or watched her final Christmas speech or her Platinum Jubilee on their phones. And she, in turn, dedicated her whole life to their service.”

Speaking to the press after paying his respects to the Queen, Mr Biden said: “To all the people of England and all the people of the United Kingdom, our hearts go out to you and you were fortunate to have had her for 70 years. We all were.

“The world is better for her.”

The President also said Her Majesty reminded him of his mother, because of her look which seemed to ask: “Are you ok? Anything I can do for you? What do you need?”

In Lancaster House, Mr Biden ended by saying he was “honoured” to have met the Queen.

He will be attending the Queen’s funeral tomorrow alongside a host of other world leaders.

Reports suggest 2,000 gusts will attend, including 500 foreign dignitaries and as well as 4,000 service personnel.

Potential billions of people are expected to be watching around the world.