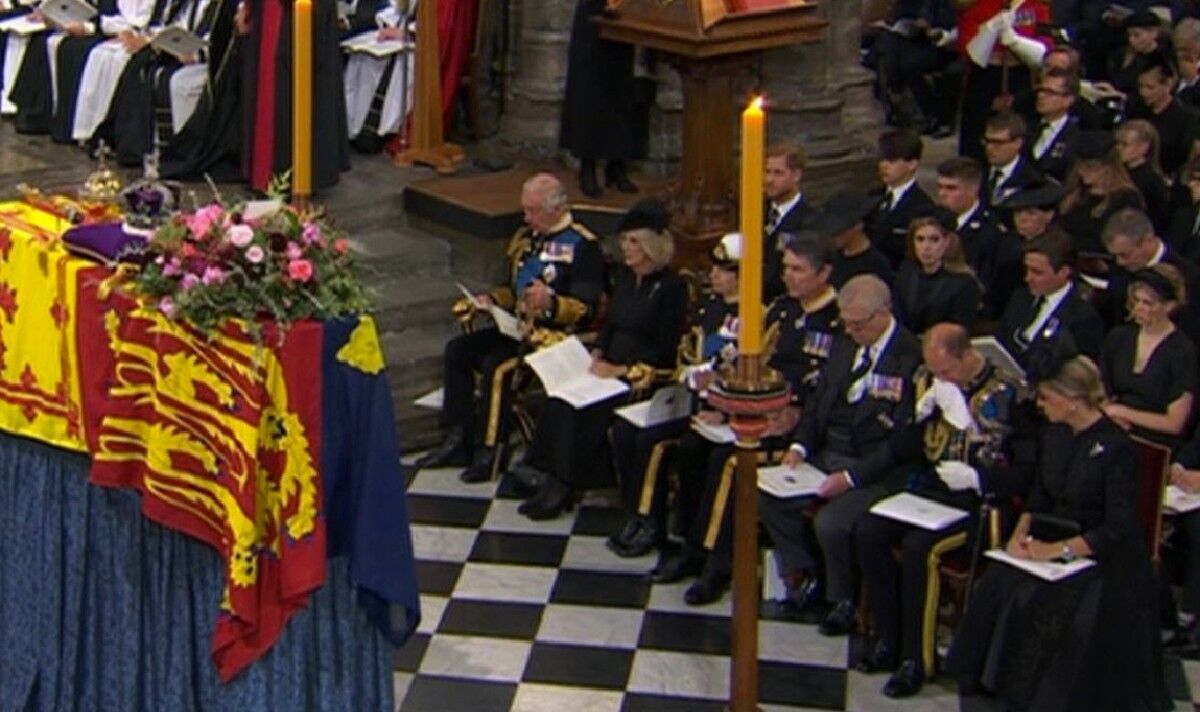 Prince Edward and his wife the Countess of Wessex wiped away tears during the funeral of his mother Queen Elizabeth II during the first speech of the ceremony in Westminster Abbey.  While Baroness Scotland was reading from the First Lesson, from Corinthians 15, Prince Edward could be seen hurriedly reaching for a white handkerchief. The youngest child of the Queen, overcome by emotion, quickly wiped away the first signs of tears as he tried to remain stoical at the funeral of his mother. His wife, Sophie, then grabbed for a white handkerchief of her own, dabbing at her eyes.

The Earl of Wessex had to wipe his eyes three times during Baroness Scotland’s speech, as the secretary-general of the Commonwealth of Nations spoke of the “resurrection of the dead” in Chris.

Baroness Scotland said, during her speech: “By man came also the resurrection of the dead, for as in Adam, all die. Even so, in Christ, all shall be made alive.”

The words rang true for Prince Edward as he struggled to stem the tears.

Prince Andrew, the Earl’s elder brother and closest sibling, looked over to check his brother was ok.

Edward’s wife, Sophie, Countess of Wessex and Forfar, then touches her husband’s leg as he struggles to fold his handkerchief.

She later withdrew her own white handkerchief to wipe away her tears.

Later in her speech, Baroness Scotland added: “O death, where is thy sting? O grave, where is thy victory? The sting of death is sin; and the strength of sin is the law.

“But thanks be to God, which giveth us the victory through our Lord Jesus Christ.

“Therefore, my beloved brethren, be ye steadfast, unmoveable, always abounding in the work of the Lord, forasmuch as ye know that your labour is not in vain in the Lord.”

From the moment the Queen’s coffin began to emerge from the Houses of Parliament, carried by pall bearers, everyone fell silent and the royals marched to the sound of bagpipes and the tolling of a bell.

King Charles III, Anne, Edward and William, all dressed in ceremonial military uniform, saluted as the coffin was lifted off the gun carriage in front of the abbey.

After 11 days of momentous change and activity since his mother died, Charles looked distraught and exhausted as the pall bearers carried the coffin into the abbey through the Great West Door for the funeral service.

Andrew and Harry, who are no longer working royals, were in morning suits and did not salute, even though both had served in conflict in the past, in the Falklands and in Afghanistan.

READ NEXT: Kate and Princess Charlotte wear matching outfits for state funeral
Queen’s coffin – what the flags placed on monarch’s casket mean
Kate puts hand on Charlotte in touching gesture of support
Sandra Oh looks sombre as she pays respects to Queen at funeral
Jacinda Ardern recalls Queen’s advice to ‘just get on with it!’