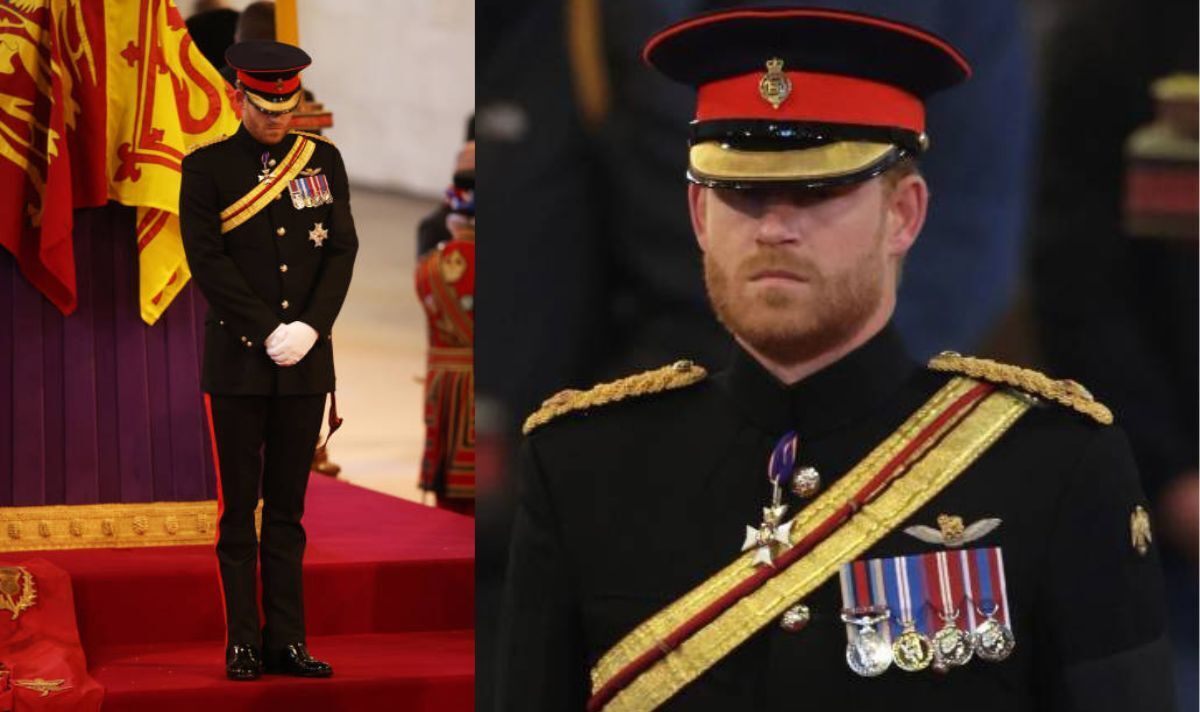 The blow to the Duke of Sussex was further strengthened by the fact Prince Andrew, who has also stepped back from royal duties, was allowed to keep the royal cypher on his uniform during an earlier vigil held for the late monarch.

Prince Harry is said to have considered wearing a morning suit to avoid “humiliation” during the vigil held by the Queen’s grandchildren at Westminster Hall on Saturday night.

The Duke, stood opposite his brother, Prince William, at the foot of the Queen’s coffin during the sombre service.

The brothers both dressed in military uniform and were joined by cousins Zara Tindall and Peter Phillips, Princesses Beatrice and Eugenie, and Lady Louise Windsor and her brother Viscount Severn.

Harry, who saw action on the front line during two tours of duty in Afghanistan, had previously been prevented from wearing his military uniform this week, following his decision to step down from royal duties.

But upon request from his father and the new King, he was permitted to wear the livery for the vigil.

The Duke of Sussex was, however, understood to have been devastated to find his beloved grandmother’s initials had been stripped from the shoulder of his uniform, The Sunday Times reports.

A friend told the newspaper: “He is heartbroken. To remove his grandmother’s initials feels very intentional.”

READ MORE: Charles to wield axe on Andrew, Harry and Beatrice who could lose role

During the painful service, Prince William wore the Blues and Royals, No.1 Uniform, The Garter Sash, The Garter Star, Golden, Diamond and Platinum Jubilee medals and RAF Pilot Wings.

The Duke’s pain over the situation is understood to largely be because his uncle, Prince Andrew, has retained the late monarch’s initials on his uniform, despite also no longer carrying out royal duties.

The “ER” initials are traditionally only worn by those “in service” of the monarch, which could explain why the Duke of Sussex no longer has the initials displayed on his uniform.

Meanwhile, the two royal brothers, Harry and William, have been reunited over the tragic loss of their grandmother.

But the reconciliation between the pair has at times been “uncomfortable” and “difficult” for Harry, a source has claimed.

It comes as Harry and Meghan were reportedly uninvited from a reception set to be held at Buckingham Palace on the eve of the Queen’s funeral.

The couple were said to have been invited earlier in the week, but are now not expected to join the coming-together of world leaders, foreign dignitaries and royals after some palace officials raised concerns that it should be reserved for just working members of the family.