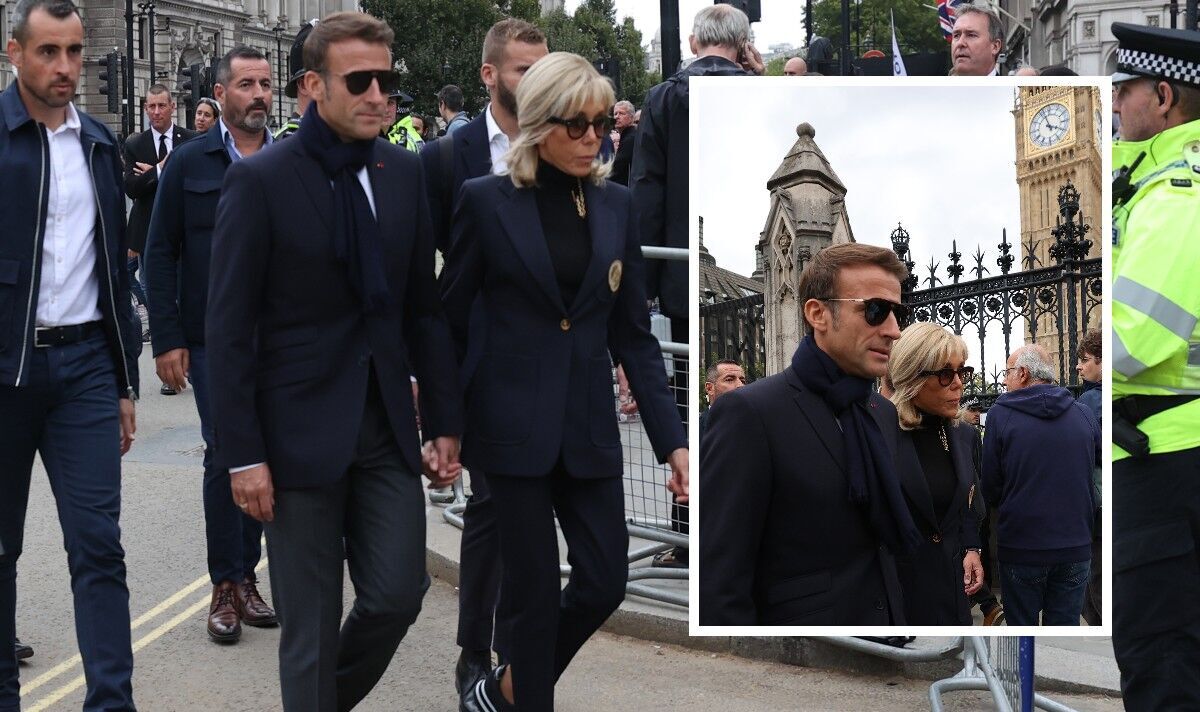 Emmanuel Macron and his wife Brigitte have arrived in London with a touching gift for King Charles. The French President and his wife are among world leaders who are visiting Britain for the Queen’s state funeral on Monday.

Mr and Mrs Macron will give Charles a book of pictures celebrating the late monarch’s visits to France, French officials said on Sunday.

The couple will present the book to Charles at a Buckingham Palace reception on Sunday night.

The King and Queen Consort are hosting the grand event for visiting leaders at the London royal residence this evening.

Mr Macron and his wife wore black outfits complete with dark sunglasses as they attended the Queen’s lying in state at Westminster Hall today ahead of the reception.

The French President is among world leaders paying their respects, with US leader Joe Biden visiting the late monarch’s coffin earlier on Sunday.

Mr Macron confirmed his attendance at the funeral following a phone call with Charles on Wednesday.

He tweeted on Thursday: “In a phone conversation with His Majesty King Charles III last night, I expressed France’s condolences on the death of his mother, Her Majesty Queen Elizabeth II. I will attend the funeral in London on Monday.

“The ties between France and the United Kingdom are unbreakable. We will continue to strengthen them, following the path laid by Her Majesty Queen Elizabeth II.”

Mr Macron also made a touching tribute in English to the late Queen the day after her death on September 8.

“Elizabeth II mastered our language, loved our culture and touched our hearts.

“From her coronation on, she knew and spoke with all of our presidents. No other country had the privilege of welcoming her as many times as we did.”

It comes as world leaders are flocking to the UK for a day of pageantry, military processions and solemnity on Monday with the late Queen’s state funeral.

The service will take place at Westminster Abbey in front of a congregation of 2,000 guests.

The coffin will be taken in a procession led by King Charles from the Palace of Westminster to Westminster Abbey for the state funeral at 11am on Monday.

The service will be televised, and a national two minutes’ silence will follow the Last Post being sounded at 11.55am.

Reveille, the national anthem and a lament, played by the Queen’s Piper, will bring the service to an end at approximately noon.

The coffin will then be taken in procession from Westminster Abbey to Wellington Arch and then travel to Windsor.

Once there, the hearse will travel in procession to St George’s Chapel at Windsor Castle via the Long Walk, after which a televised committal service will take place.

Later in the evening, there will be a private interment service with members of the Royal Family.

The Queen’s final resting place will be the King George VI memorial chapel, an annex to the main chapel – where her mother and father were buried, along with the ashes of her sister, Princess Margaret.

Prince Philip’s coffin will move from the Royal Vault to the memorial chapel to join his wife’s.