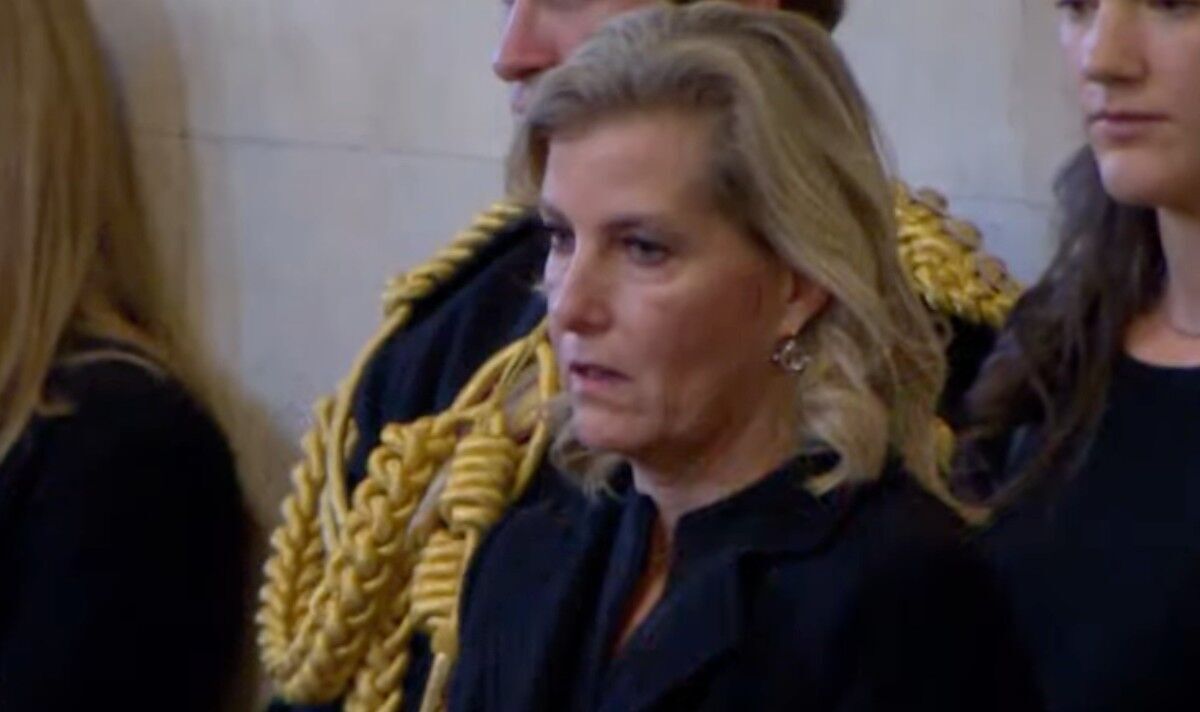 Sophie looked grief-stricken as her children took part in a vigil with the late Queen’s other grandchildren at her coffin this evening. The Earl and Countess of Wessex watched on as Lady Louise Windsor and James, Viscount Severn, guarded their beloved grandmother’s coffin with their cousins as she lies in state at Westminster Hall ahead of the funeral on Monday.

The Prince of Wales was at the head of the coffin flanked by his cousins Zara and Peter.

The Duke of Sussex stood at the foot with Princesses Beatrice and Eugenie.

Louise and James, the youngest two grandchildren, were at the middle of the coffin.

They had their heads bowed as members of the public filed past them during the vigil at 6pm, which lasted until 6.15pm.

Harry and William were in military uniform, while the other grandchildren wore black.

The Prince of Wales, who is now heir to the throne, led his brother and cousins into Westminster Hall.

Mourners walked past as the younger generation of the Royal Family stood in silence united in grief for their grandmother.

Earlier on Saturday, Sophie joined Prince Edward for a walkabout outside Buckingham Palace.

The couple emerged from the royal residence in central London just before 3pm to greet well-wishers.

A cheer erupted from the crowd as Edward and Sophie, who is said to have been like a second daughter to the late Queen, made their way out.

Well-wishers could be heard telling Edward and Sophie “sorry for your loss”.

The Earl told those in the crowd: “I know that my mother would really appreciate this fantastic support.”

The walkabout comes after Edward joined his siblings King Charles, Princess Anne and Prince Andrew in holding a vigil around the late Queen’s coffin in Westminster Hall on Friday evening.

The four royals wore their military uniforms and were silent, motionless, with their heads bowed and hands clasped in front as they stood for just over 10 minutes as members of the public continued to file past for the lying in state.

Ahead of the vigil on Friday, Edward paid a touching tribute to his “beloved mama”.

In a statement, he said: “As a family, we have grown up learning to share our parents, especially our beloved mama, with the nation, her realms and the Commonwealth.

“While it has been lovely to have spent time saying our own farewell privately at Balmoral, it is now time to allow others to be able to say their farewell.

“We have been overwhelmed by the tide of emotion that has engulfed us and the sheer number of people who have gone out of their way to express their own love, admiration and respect to such a very special and unique person who was always there for us.

“And now, we are there for her, united in grief. Thank you for your support, you have no idea how much it means.”

Referring to their children Louise and James, the Earl continued: “The Queen’s passing has left an unimaginable void in all our lives.

“Sophie and I have taken huge pleasure in seeing our James and Louise enjoying the places and activities that their grandparents loved so much.

“Given that my mama let us spend so much time with her, I think she also rather enjoyed watching those passions blossom.

“Those times together, those happy memories, have now become massively precious to each and every one of us.

“May God bless Her Majesty and may her memory be long cherished even as the baton she has carried for these past 70 years now passes to the next generation and to my brother, Charles.”