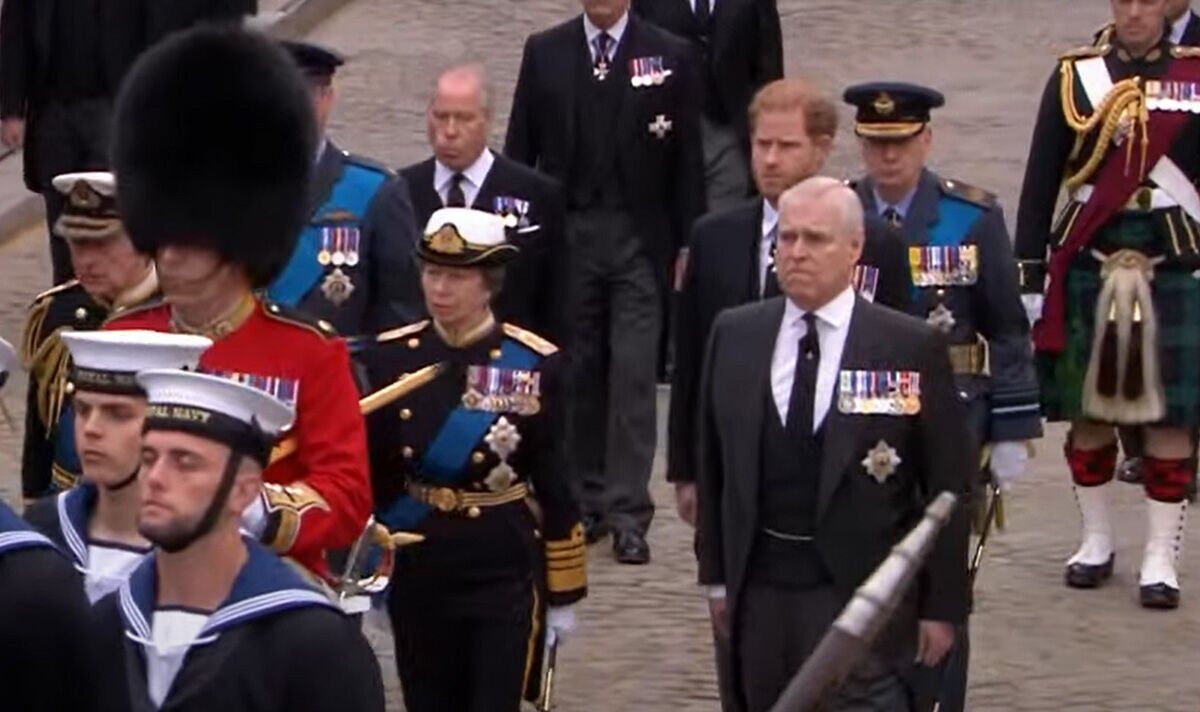 The Duke of York arrived at Westminster Hall to join other members of the Firm and of the Royal Household in the procession taking the Queen’s coffin to Westminster Abbey. Andrew followed the lead of his elder brother and King, Charles III, who guided the procession by walking right behind the Royal Navy’s state gun carriage carrying Her Majesty’s casket.

The prince had a visibly pained look as he followed his late mother’s casket along a parade from Westminster Hall to the abbey.

Marching alongside his siblings, and in front of Prince Harry, Andrew appeared to bite his lip as he trained his eye on the coffin.

The Duke, who served in the Falklands War, wore his military medals on his chest as the cortege approached the London abbey.

Andrew, the Queen’s second son, was known to be very close to his mother and in her last months had been spotted regularly visiting her at Windsor Castle.

On Sunday, hours before the funeral took place, he expressed his love for the late sovereign in a personal message.

In a statement dated September 18, Andrew said: “Dear Mummy, Mother, Your Majesty, three in one.

“Your Majesty, it has been an honour and a privilege to serve you.

“Mother – of the nation, your devotion and personal service to our nation is unique and singular; your people show their love and respect in so many different ways and I know you are looking on honouring their respect.

“Mummy, your love for a son, your compassion, your care, your confidence I will treasure forever.

“I have found your knowledge and wisdom infinite, with no boundary or containment.

“I will mill your insights, advice and humour.

“As our book of experiences closes, another opens, and I will forever hold you close to my heart with my deepest love and gratitude, and I will tread gladly into the next with you as my guide.”

Over the period of mourning, Andrew has appeared in public a number of times despite no longer being a working royal.

Alongside being spotted viewing tributes left by royal fans for the Queen at Balmoral and Windsor, Andrew also joined the procession taking the late monarch’s coffin from Buckingham Palace to Westminster Hall last Wednesday.

A few days later, he joined his siblings in a poignant and emotional vigil, which saw him, King Charles, Princess Anne and Prince Edward standing at each side of their mother’s coffin for 15 minutes.

On this occasion, the Duke was allowed to wear his military uniform, for the first time in public since he stepped back from public duties in mid-November 2019.