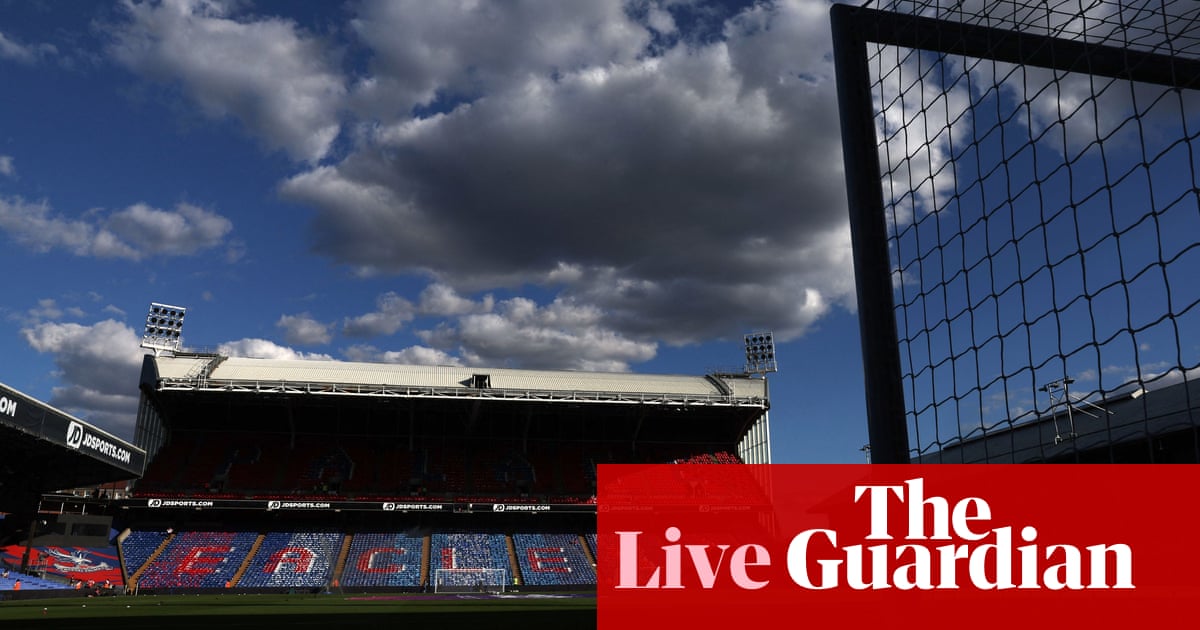 “Evening,” says Martin Segerstråle. “So, will Gabriel Jesus now prove he is a brilliant striker who didn’t fit the Pepball system, or have Arsenal bought another Bendtner? I just feel actual quality players shouldn’t be system-dependent.”

I’m not sure he was unsuited to Pepball. He just wasn’t quite good enough to be a regular No9 for a team that aspires to be the best in the world. But Pep still liked him – Jesus started a lot of big games, albeit often in wide positions – and it’ll be a surprise if he doesn’t do really well at Arsenal.

Everything you need to know about the new season. Okay, not everything.

No surprises in either XI. Cheick Doucoure is the only summer signing to start for Palace, while Arsenal include Oleksandr Zinchenko and Gabriel Jesus. Their defence includes another debutant: William Saliba, the France international who excelled on loan at Marseille last season.

A bit of Palace transfer news

Christian Benteke is joining Wayne Rooney’s DC United in the MLS, ending a mixed 10-year spell in English football. At times he was banter fodder, at others he was spectacularly good.

The lovely thing about dogs is that they’re always thrilled to see you. Even if you pop out to post a letter and come back two minutes later, you’ll be greeted as if you’ve been away since 2017.

A similar thing happens whenever a new football season begins. We all do a big jig of excitement to celebrate the fact that football is BACK, even though it hever really went away. This year we had the Nations League in June and the Euros in July, not to mention a gazillion extensively covered pre-season friendlies and 482,195 transfer exclusives. Doesn’t matter. Loyal old football-loving dogs that we are, we’ll always start wagging our tail before the first game of the season. Wag wag wag.

This will be a unique season – the first, and possibly last, to have a World Cup for a winter break. A night game at Selhurst Park, which pound for pound produces the best atmosphere in the Premier League, is a good place to start.

Crystal Palace v Arsenal is 12th v 5th in the parlance of 2021-22, though both teams – like everyone on the opening wekend, before reality’s incisors have gone to work – are looking upwards. Palace have realistic ambitions of a top-half finish, which would be only their second since the miracle season of 1990-91, while Arsenal fancy their chances of finishing in the top four for the first time since the happy, innocent, isn’t-the-world-a-reasonably-nice-place spring of 2016.

Palace have gone under the radar this summer. They’ve made some interesting, relatively low-key signings, most notably Cheick Doucoure, but the main topic of discussionk has been about how they will cope without a player who wasn’t theirs in the first place: Conor Gallagher, who is back at Chelsea after a brilliant loan spell. On the plus side, the excellent Eberechi Eze is back after missing most of 2021-22.

Arsenal’s transfer business has been universally praised. Gabriel Jesus and Oleksandr Zinchenko were good enough to play hundreds of games for England’s best team, while Fabio Vieira has the potential to be a star.

For richer and poorer, Arsenal have been all about potential under Mikel Arteta. There is no more exciting young team in England, maybe Europe. Now they want to prove that you can win something with kids. A fourth-place trophy would do for starters.