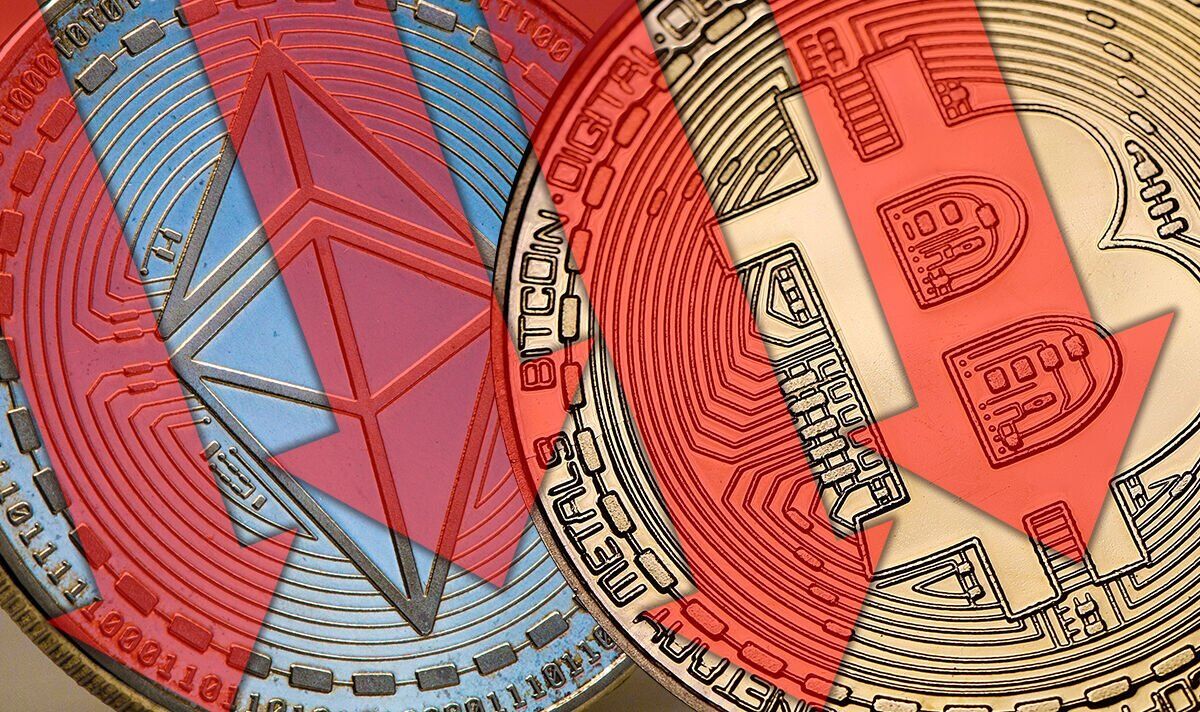 Bitcoin and Ethereum, the two biggest cryptocurrencies in the world, faced a major blow today, as prices continued to plummet, with the global crypto marketing even plunging below the $1trillion (£878billion) mark. In just the past 24 hours, Bitcoin, the leading currency on the market, fell by over 7.8 percent, falling below the $19,000 (£16,690) mark. Meanwhile, Ether, which is the coin linked to the Ethereum blockchain, and is currently the second largest cryptocurrency, plummeted by a staggering 10 percent, reaching a two-month low at $1,370 (£1146).

These two major drops have plunged the global cryptocurrency market into freefall, dropping below the $1trillion mark, and reaching $974billion (£865billion) in the last 24 hours, according to CoinGecko.

In June, Ether enjoyed a massive surge as a result of excitement around an upgrade of the Ethereum blockchain, now that the revamp of the technology is completed, prices have been falling.

Meanwhile, investors are bracing themselves for the possibility of a major wave of monetary tightening policies, particularly in the US, as the Federal Reserve is expected to issue a massive interest rate hike to fight the cost of living crisis.

The world’s second-biggest cryptocurrency is getting a revamp that should increase the speed of transactions on the Ethereum blockchain and lower their cost, according to the network’s developers.

The new update promises to lead Ethereum away from the energy-intensive ‘proof of work’ mechanism for validating transactions and to the more environmentally friendly ‘proof of stake’.

This upgrade is among a series of major changes that will affect Ethereum, making the currency more scalable and decentralised. Although further challenges still await the major currency, including the possibility of regulatory backlash.

XRP and Cardano, which are the world’s seventh and eighth largest cryptocurrencies, both fell by about 10 percent in the past 24 hours.

Express.co.uk previously reported that despite initial surges in Ethereum following the update, its price could plummet to new lows as part of a “return to normal” bull trap.

This refers to the classic Wyckoff “return To normal” market cycle where many bullish traders get caught out in a buy-in as the price pulls back in a downward trend.

The founder of the Hex and Pulse cryptocurrencies Richard Heart tweeted last: “I think the price of Ethereum will dump hard in 2 days when the EIP-1559 actually goes live.”

He added: “Speaking about highly speculative markets like Bitcoin and Ethereum have price run-ups for major news events. The Chicago Mercantile Exchange Bitcoin futures launch in 2017 was the day of the $20k top which went down to $3k.

“It’s activating in two days, and just happens to line up with a probable bull trap ‘return to normal’ on the market bubble psychology chart. A perfect storm for new local lows under $1700 after it activates.”

“The coin has trailed an uptrend from the weekend, and we may see this brewing positive sentiment over the coin shoot its price to $3,000 in the coming days/weeks following the update.”