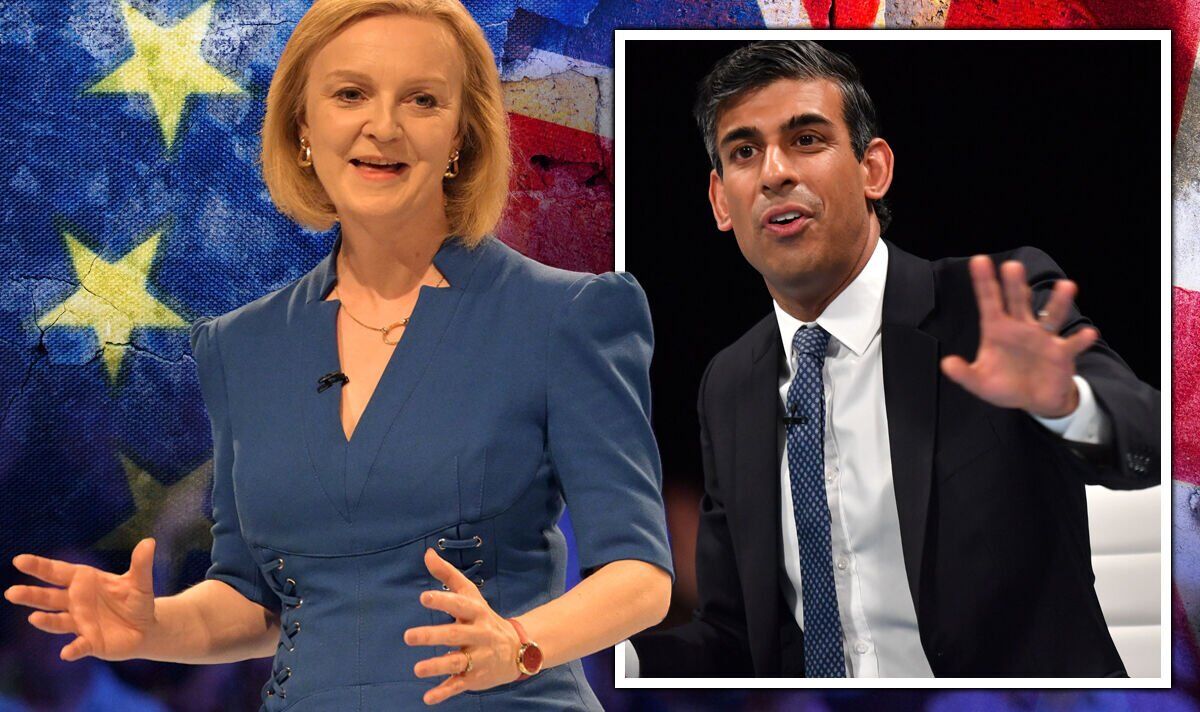 Mr Sunak spoke exclusively to Express.co.uk, following the revelation that a private survey by polling company Techne UK revealed he was nine points ahead of his rival Liz Trust on Brexit trust. This is despite the hardcore Brexiteers in the European Research Group (ERG) throwing their weight behind Ms Truss who is a self-confessed Brexit convert having backed Remain in 2016.

As the campaign heats up with many believing the former Chancellor is trailing behind, Mr Sunak pointed out as a new MP he put his career on the line to back leaving the EU in 2016 when turned down David Cameron’s demand to sign up to the Remain campaign.

But despite this he has often been portrayed as a “Brexit in name only” (BRINO) candidate with question marks over whether he would get tough with the EU and tear up its red tape.

The issue will be important as many Tory members are Brexiteers and the ballots are arriving this week with most expected to have voted by the weekend.

In a strong retort to his critics, Mr Sunak told Express.co.uk: “In 2016, I took a big risk. I went with my heart and voted for Brexit.

“I did that because I believed that we could do things differently as a sovereign nation – taking back control of our borders and our waters as well as removing unnecessary regulation to free up our economy.

“Brexit was also about changing our mindset. It wasn’t just about what we couldn’t do, but about what we didn’t do. I felt that we would be able to create a brighter future and as Chancellor I already began to deliver on that.”

Having designed the UK’s freeports programme while still on the backbenches he has argued that he was ahead of the game in terms of looking to maximise the benefits of Brxit and now “wants to double down”.

He said: “Whether it is setting up freeports that are creating new jobs and opportunities across the country, removing and improving regulation of our financial services sector to help it thrive not just survive or cracking down on illegal immigration to stop the scourge of the small boats crisis.

He added: “As Prime Minister, I will double down on capitalising on the benefits of Brexit. I backed it, believe in it and have delivered on it and Express readers can trust to keep on delivering.”

READ MORE: Sunak and Mordaunt are real Brexiteers whatever critics may claim

The Techne UK findings in a poll of more than 6,000 voters also included 807 Conservative Party members.

Of the Tory members, 50 percent said they thought Mr Sunak, who backed Leave in 2016, could be trusted more on the benefits of Brexit compared to 41 percent for Ms Truss.

However, when it came to tackling immigration, one of the key issues of Brexit in terms of “taking back control”, Ms Truss beat Mr Sunak by 60 percent to 33 percent.

Overall while 48 percent to 25 percent expect Ms Truss to be the next leader the gap between support was only five points – 48 percent to 43 percent among Tory members.

This makes the Brexit issue still a key one in the voting which concludes with a result on September 5.

Truss, Sunak, Starmer or Rayner? – Who do YOU trust to govern the UK? [REACT]