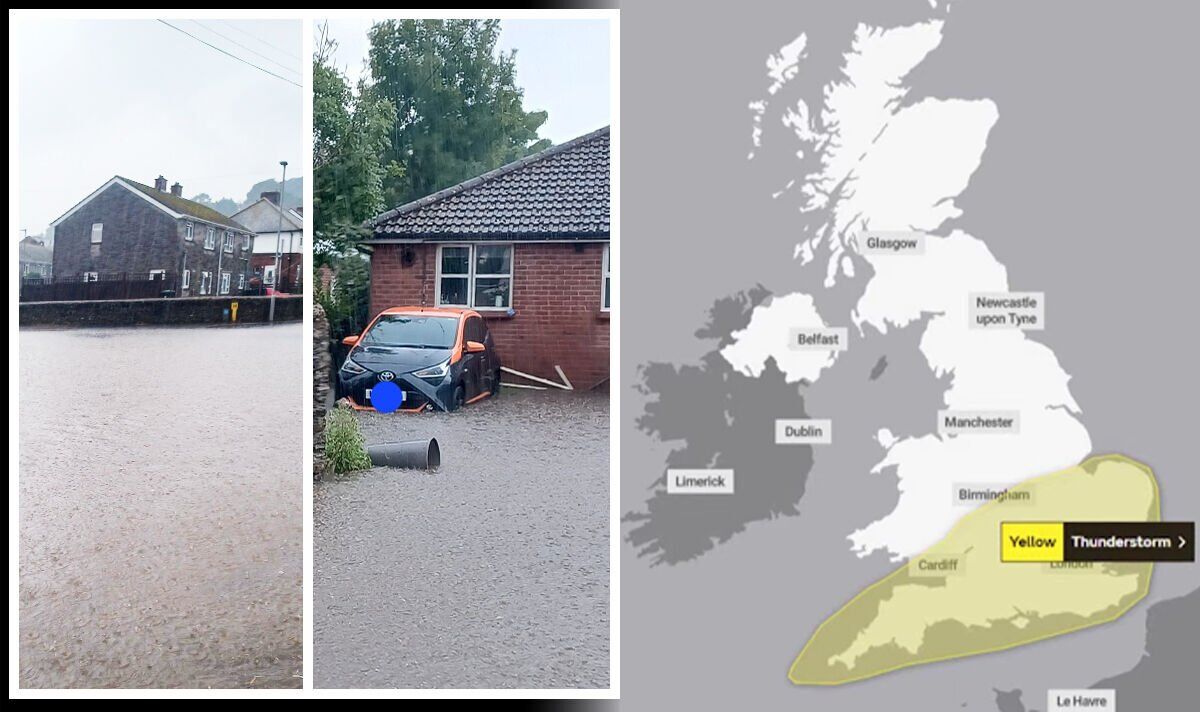 After weeks of sweltering weather, which has contributed to drought and left land parched, the Met Office‘s yellow thunderstorm warning for Wednesday forecasts conditions in which “20-30 mm of rain is possible within an hour”. Now millions are being told to prepare for travel chaos and power cuts after forecasters warned fast-flowing or deep floodwater could pose a “danger to life”.

Forecasters urged people to prepare for “heavy thunderstorms” which “come in one after another”.

Communities in central, southern and eastern parts of England – and south-east Wales – could face flash flooding.

The warning said communities could be cut off by flooded roads.

The Met Office said: “Whilst some places will miss them, thunderstorms and areas of heavy rain will develop quite widely on Wednesday across central, southern and eastern parts of England and southeast Wales.

“20-30 mm of rain is possible within an hour, but where areas of thundery rain become slow-moving, some places could see 60 mm in less than three hours.

“A few spots could see more rainfall than this still, whilst hail and lightning may be additional hazards.”

The Environment Agency had issued 29 flood alerts by Tuesday night.

READ MORE:Flash floods could cause ‘danger to life’ as Brits face another deluge

Met Office forecaster Simon Partridge said that “heavy thundery showers could develop in warm muggy air” and “there could be some high totals (of rainfall), particularly if you see some heavy thunderstorms come in one after another”.

Mr Partridge added: “The ground has been so baked dry because of the heat and the lack of rain for a number of days.

“When the rain has come, it has been hitting ground that is completely dry and baked dry like concrete.

“It is running off than more traditionally. If there is some moisture in the ground, it is a lot easier for it to soak up the rain that hits it.

“We have probably a higher run-off rate for the rainfall than we would normally have.

“It is almost like all the fields have been tarmacked because the water has been running off them as there has been so little of it that has gone into the ground.”

The heaviest downpours on Tuesday were at Spadeadam in Cumbria, with 25.4mm of rain, and in Trengwainton House, Cornwall, with 18.4mm, the Met Office said.

It came as authorities moved Yorkshire to official drought status on Tuesday, following parts of the South West, southern and central England and the East of England.

Footage and photos shared to social media showed torrential rain and floodwater sweeping through towns across southern England and Wales, including Newquay in Cornwall, Bishop’s Tawton in Devon, Haywards Heath in West Sussex, Port Talbot in south-west Wales, and Bridport in Dorset.

One Twitter user shared a video of floodwater in Newquay, writing: “I’ve never seen rain like this. Our road is flooding #Newquay.”

Another Twitter user in Bishop’s Tawton, north Devon, said: “(F)lash flooding causing use of sandbags to prevent water in house, despite recent flood work by EnvAgency urgent need for solutions.”

ScotRail imposed speed restrictions on some routes on Tuesday, while in Perth, Network Rail said it dealt with flooding at the station.

People in northern regions should be able to enjoy a day that feels fresher, a little cooler and is mostly dry – with some sunny spells.