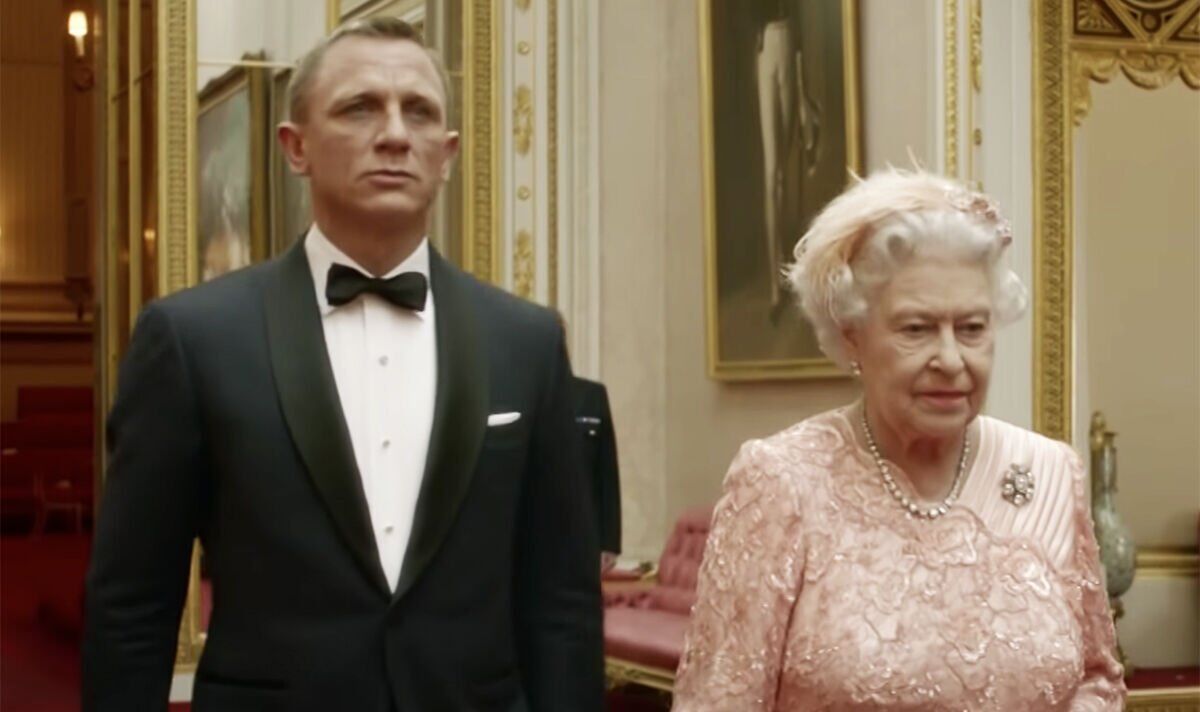 The late Queen Elizabeth II surprised her subjects this summer with a touching Paddington Bear sketch to open her Platinum Jubilee concert. But it has also been 10 years since the monarch secretly filmed her incredible London 2012 Olympics opening ceremony short with James Bond star Daniel Craig.

Fans will remember Bond picking up The Queen from Buckingham Palace to fly her in a helicopter to the Olympic Stadium and parachute out together.

Despite the belief of some dignitaries in the crowd, professionals leapt out of the chopper live and opened Union Jack parachutes dressed as 007 and Her Majesty. But timing everything perfectly with the pre-recorded VT was a real challenge even though it was a great experience for those involved.

One key player who worked on the sketch, the live jump and the 50th anniversary Bond movie Skyfall, told Express.co.uk: “We did the filming in Buckingham Palace in March 2012 and parked the helicopter in the gardens at the back. We had the corgis dashing in and out of the rooms, so we spent a lot of time playing with them which was great fun.”

The source continued: “It was immensely complex because it was a mixture of live and VT. We’d done a lot of pre-filming at Kensington Place with Daniel Craig leaping out of the helicopter when it was on the ground with a wind machine to make it look like the helicopter was moving. The Queen that day was played by a double.”

To keep everything secret, the Hollywood star had to be surrounded by special canvas shielding so people couldn’t see what was going on.

On what the 007 legend was like that day, they said: “He seemed to be quite a private man. He came in, did the job very professionally and quickly left, to be honest with you. I didn’t have a lot of time to chat with him but I said hello and I passed the time of day.”

On the night of the London 2012 Olympics opening ceremony, there were some serious nerves. The source admitted: “Early on, because of the threat of wind, we decided the parachutists would land on the bridge just to the side of the stadium.”

The test jumps had been done in Oxfordshire in the spring where the press had cottoned on to the story. But to the production’s luck, one major publication decided to publish it on April Fool’s Day.

The insider continued: “On the night we had to be there absolutely on time so they could cut from VT to live to VT to live, making the real-life jumps seamless. When we actually did it, it was the best timed compared to all the rehearsals.”

The source added: “I was back in our base in Essex, where we launched from, and was watching it on television and listening in on the radio transmissions as it was happening with my fingers crossed. In a sense, one felt we were representing the nation because it was such a high-profile event with billions of people watching live. If it had all gone wrong, it would have been so embarrassing for everybody. So when it all worked out, we cracked open a bottle of champagne the moment it was all over and celebrated. It was kind of like the most nerve-wracking moment of my life!”