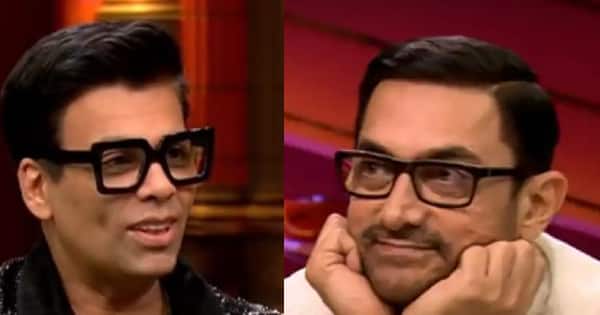 Aamir Khan is currently busy promoting his Laal Singh Chaddha and there has been a constant debate over whether this big-budget film will be able to match up to the box office collections of South films or not. Of late, Bollywood films have been suffering tough competition from South films. RRR, KGF 2, and others did phenomenally well at the box office while Shamshera, Gangubai Kathiawadi and others struggled at BO. Now, all eyes are on Laal Singh Chaddha. But before its release filmmaker, Karan Johar blamed Aamir Khan for the Bollywood films suffering. Also Read – Kareena Kapoor Khan faces massive flak for saying ‘masses haven’t seen Forrest Gump because it is an ‘elitist’, ‘classist’ film

Koffee With Karan 7:Karan Johar says Aamir Khan is to be blamed for the change in Bollywood
On the show Koffee With Karan 7, Karan Johar stated that it was Aamir Khan who brought about a change in the kind of films that were being made by Bollywood. He spoke about films like Lagaan, Dil Chahta Hai, Taare Zameen Par and others. Karan asked Aamir, “Is there a shift that’s happened in our movies recently in terms of like there’s a tonality that KGF has or Pushpa has that actually Hindi cinema used to have. We actually let go of it and you’re responsible for it.” Also Read – Sita Ramam: Prabhas reviews Dulquer Salmaan starrer; calls Rashmika Mandanna ‘most wanted heroine’

Over this, Aamir Khan stated that films should be able to touch audiences hearts. “No you’re wrong. Those were all heartland films. Those movies had emotions. They reach the common man. It’s something that you will emotionally connect to. Rang De Basanti is a very emotional film. It touches the people at grassroots,” he said. Also Read – Koffee With Karan 7: Kareena Kapoor Khan joins Sara Ali Khan, Samantha Ruth Prabhu and others to talk about exes; here’s what she has to say about Shahid Kapoor

Akshay Kumar on South vs Bollywood
Earlier, Akshay Kumar had spoken about South Indian films doing much better than Bollywood films on Koffee With Karan 7. He mentioned that stars in Bollywood are not open to doing multi-starrer or a two-hero film and that needs to change.